Difference between revisions of "Episode 16" - EvaWiki - An Evangelion Wiki - EvaGeeks.org

Difference between revisions of "Episode 16"

Shinji beats Asuka in a synch test, much to the latter's annoyance. Not too long after, the Evas are dispatched to deal with a mysterious apparition, and Eva-01 is sucked into a shadowlike blackness that materializes out of nothingness from under it. While an emergency operation to rescue the captured Eva is concocted, Shinji goes on a trip into the depths of his own consciousness...

In Misato's apartment, Asuka gets into a very one-sided argument with Shinji about his idiosyncrasies and how annoyed she is with them. When Misato tries to take Shinji in defense, Asuka accuses her of enabling his bad habits, and claims that she is only being so soft on Shinji because her and Kaji has gotten back together. Misato tries to protest that there is nothing between her and Kaji, just as Kaji leaves a message on her answering machine, inviting her out for a drink. This only makes Asuka more irate, and she leaves in a huff.

The three pilots undergo a synch test, in which Shinji emerges the best-synchronized pilot, a fact that greatly raises Shinji's mood, but annoys and disturbs Asuka, who despite attempting to pretend that nothing is wrong, rants about it at length to an indifferent Rei.

In the early hours of the next morning, a bizarre shadow emerges from the street in the city, seemingly out of nowhere. An alert is declared at Nerv and personnel observe as a sphere with Zebra-like black and white stripes float over the city. 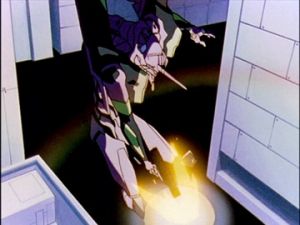 The Magi is confused about whether or not this peculiar apparition is an Angel, and so the three Evangelions are dispatched to draw it out of the city airspace before engaging it. Asuka's goading prompts Shinji to take point position, closest to the target. An overconfident Shinji attacks the sphere without waiting for the other two Evas to get into position, and the sphere simply disappears. The target is confirmed to be an Angel, and to everyone's horror, a dark shadow materializes under Eva-01 and sucks it in, with Eva-00 and 02 only narrowly avoiding the same fate.

Misato takes charge of the rescue operation, but things are looking grim. Eva-01's umbilical cable was pulled in from the shadow, but the Eva was not on the other end of it, and there appears to be no immediate way of interacting with the shadow without getting sucked into it too. To make matters worse, Eva-01's batteries can only sustain life support for about sixteen hours. If Shinji is not out by that time, he will likely die.

Ritsuko soon explains that the Angel is the shadow on the ground, not the floating sphere, and that it exists in another dimension in a form that can only be explained by higher mathematics. She concocts a plan that involves dropping all 992 N2 mines in existence to destroy the Angel and recover Eva-01, even at the risk of killing the pilot. Misato is incensed at Ritsuko's suggestion that Shinji's health and safety is a secondary priority, and slaps her in her anger before demanding to know why she and Gendo are willing to risk so much to protect Eva-01, and what the Evangelions actually are. When Ritsuko tries telling her that she has been given all the information, Misato spits back at her that she knows she is lying, referring to what Kaji has recently revealed to her. Unable to come with a reply, Ritsuko merely tells Misato to trust her, and that she will be taking over the command of the operation. 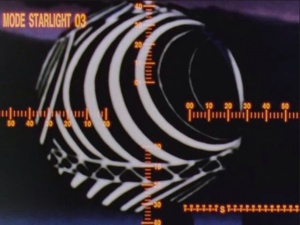 Meanwhile, Shinji, being trapped in the Eva, slips in and out of consciousness, and goes through a depressing introspective journey inside the Eva, when another entity - (The Angel Leliel) speaks about the shallowness of his own existence with him. [2] [3] As the life support starts to give out, however, Shinji, demoralized and tired, quietly accepts his incoming demise, before a luminous apparition of a woman appears before him and caresses his cheek. As the woman embraces him, a stunned Shinji realizes that she is his mother. Shinji then relives a half-forgotten memory of himself as a child on a sunny day, smiling as he holds a small red sphere up to his mother in his hands. His mother, whose face is obscured by shadows as she stands with her back to the sun, tells him: "Are you ready? Well, that is good for you."

Outside, both Evangelions are in position and a huge swarm of aircraft prepares for the mine drop, and the plan is just about to go into action when the shadow on the ground shakes and rips apart as though hit by an earthquake, and the sphere turns black and solid, before a gigantic hand punches through it, causing a fountain of blood to rain down. To everyone's utter horror, Eva-01 violently tears out of the sphere and bellows in a horrible parody of birth, killing the Angel. With Eva-01 now free again, Shinji briefly reawakens in an open entry plug with a crying Misato embracing him. Shinji quietly says that he "just wanted to see you again," before slipping back to unconsciousness.

After the operation, Ritsuko and Gendo meet to watch over the cleaning of Eva-01. Ritsuko warns him that Misato is growing suspicious of them and might be on to the truth. Gendo ponders this and tells her to let Misato be for now.

Shinji later wakes up in the hospital with Rei at his side, where she had spent the night sitting on a chair at his bedside. When she notices that Shinji is conscious, she moves to leave the room, telling Shinji that he can rest for now. When Shinji protests that he is feeling fine, Rei replies with: "Well, that's good for you." Remembering his mother saying those exact words in the same manner, Shinji is shocked and stares dumbfounded at Rei as she walks out the room. Shinji is, however, distracted when Rei opens the door, revealing Asuka lurking in the hallway outside his room, who quickly hides when she realizes that Shinji can see her. Shinji cannot help but laugh briefly at her antics, but he then catches himself, and turns morose, implying that his experiences inside Leliel has left a significant impact on him.