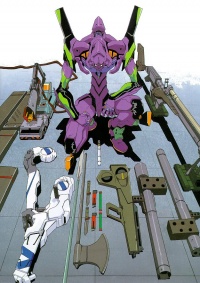 Unit-01 with an assortment of weapons. In the center are several melee weapons frequently used in the series.

Evangelion Melee Weapons are those used in hand-to-hand combat, and are used against the Angels. They are not used as frequently as Ranged Weapons, likely because they are not effective at penetrating an A.T. Field.

The Spear of Longinus and the Rebuild-only Spear of Cassius are excluded from this list due to their alien nature and functions beyond being simple "weapons".

Progressive Knife: Knife-type weapon that can stab and slice. A Progressive Knife (often called "Prog Knife" for short) is a combat knife stored in the left shoulder pylon of an Evangelion which uses it, and is one of the Evas' basic armaments. The blade of the knife vibrates at an extremely high frequency[1], increasing its cutting sharpness to the point that it can cleave the matter of a target object at a molecular level.

The Progressive Knife is seen in Episodes:

Unit-02 with the Sonic Glaive

Sonic Glaive: The spear-like weapon used to cleave Israfel in half in Episode 09. It also appears in Episode 19, but is never used. In real life, a glaive is a spear shaft with a knife at the end instead of a spearhead. So it is presumably based on the same technology as a progressive knife, but with an extended range.

Unit-02 with the Smash Hawk

Smash Hawk: Axe-like weapon, capable of being wielded with one or two hands. Eva-02 sortied with it in Episode 16, but never used in combat against an Angel. Also probably based on progressive knife technology, using sonic vibrations to increase the sharpness of the blade: it is not as long as the "Sonic Glaive" spear, but has a wider blade for more damage. 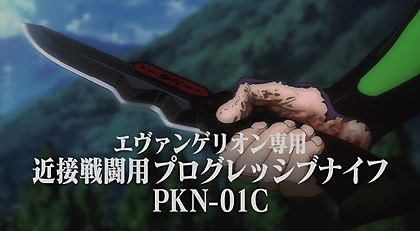 Appears in Evangelion 1.0: You Are (Not) Alone. Unlike its television forebear, this close-in melee weapon has a slightly-altered blade shape, but like a jackknife the weapon can be folded and stowed into the left shoulder portable arms compartment.

Eva-02 uses a glaive-like weapon to attack Eva-13 during Rebuild of Evangelion 3.0. This weapon's name and technological basis are unknown.

Magorox & Countersword: Designed for the show by Ikuto Yamashita, but never used. A set of swords for Eva-01's use. Appears in some production art and included with some models. "Magorox" is short for "Magoroku Exterminate Sword".

Dual Saw (デュアルソー): Designed by Yamashita for Neon Genesis Evangelion 2. Appears in the manga; used by Kaworu in Eva-02 against Armisael. The Dual Saw is exactly what it's title states: a chainsaw with two blades placed beside each other.

"Javelin": Javelin-like weapon that has appeared in multiple official illustrations, but not known to have appeared anywhere else.