A Nerv branch in Nevada is obliterated in a catastrophic accident, and Nerv headquarters prepares to station a new Evangelion in Japan. The Fourth Children(Child) is selected, unbeknownst to Shinji.

The episode opens with the Instrumentality Committee interrogating Misato about the incident with the Twelfth Angel. The Committee seriously considers the possibility that the Angel was trying to communicate with mankind and took the Eva for that purpose, but Misato, acting as a proxy for a mentally disturbed Shinji, is incapable of conclusively answering what happened. Lorenz ends the meeting, and talks to Gendo. Gendo notes that it appears that the Angels are indeed starting to show signs of intelligence, and it means that the time Seele has left is running short.

Toji is seen in the hospital, and some of the hospital staff chat with themselves about how caring he is as a brother, and how nice he is to take care of his injured sister (hurt at the beginning of the series as one of the unnamed casualties of the battle with Sachiel)[2]. Gendo and Rei enter Nerv headquarters, and Gendo asks a few generic questions about Rei, such as how she is feeling and how she finds it at school. He does not make any further inquiries about her in a personal regard. Back at school, Toji embarrasses Shinji and Asuka by saying they fight like a married couple.

An orbital view of Post-Second Impact America is seen, with a small red dot spreading across the continent. Absolute panic ensues in the bridge, since Nerv's Second Branch in Nevada has completely vanished. Misato, Ritsuko, and the bridge trio review the incident, and notice that the disappearance took place at the same time that the restored S² Engine sample was to be installed on Evangelion Unit-04. A ridiculous 32,768 possibilities for the accident abound, including sabotage. Ritsuko suspects that the branch was swallowed into a Dirac Sea like Eva-01 had previously, and when Misato criticizes the idea of using things they don't fully understand, Ritsuko thinks to herself, "Just like the Evas." Later, on the escalator, Ritsuko informs Misato that the U.S. Government is sending over Evangelion Unit-03 to them from the United States, to prevent the First Branch from being lost as well. 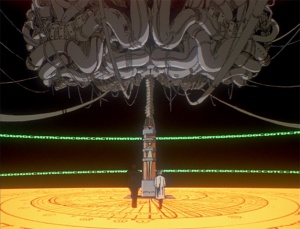 Ritsuko and Gendo discuss the usage of the dummy system, and Gendo orders the data to be installed on Eva-01 and Eva-02. Ritsuko says that the errors in the dummy system make it risky to use for the first activation of Eva-03, but there is a candidate for whom a core can be readied immediately[3]. Misato is surprised to discover who the Fourth Child is, and decides not to tell Shinji. Fuyutsuki and Gendo, on a train ride, discuss matters pertaining to Tokyo-3 and mankind, as well as the matter of Eva-04's catastrophic accident.

Toji has class duty and is asked by Hikari to deliver a bunch of printouts Rei. Toji protests, saying that he cannot just barge into a girl's home uninvited. Hikari is about to offer to go with him, but Toji is already asking Shinji if he wants to come along, since he knows were Rei lives. When they arrive at Rei's apartment, the room is still in an absolute mess, and Toji is rather shocked to see a girl's room looking so messy. Shinji decides to clean up a bit as a favor for Rei while he is here, to which Toji starts to reminiscence about the time he and Shinji first met. He admits that he thought Shinji was a selfish jerk back then, but he has been proving him completely wrong about that ever since. Rei soon returns, and surprised, thanks Shinji for cleaning up. She later realizes that she has never said "Thank you" to anybody, not even Gendo. During synch tests, Shinji's synch level is found to be dropping after the incident with Leliel.

The next day, Toji is called away at lunchtime to see the Principal. Inside, Ritsuko is heard greeting him, and he does not reappear until long after lunchtime, and seems oddly preoccupied. Kensuke talks with Shinji, telling him about Eva-03's arrival to Matsushiro and Eva-04's loss, trying to prope him for information on these events. Shinji realizes that he hasn't been told about either, and is somewhat annoyed that Misato hasn't told him anything. Kensuke, though somewhat shocked that Shinji, as an Eva pilot, doesn't know, tries to rationalize this to him, saying that he probably hasn't been told because it doesn't directly affect Nerv Headquarters.

Kaji later tries to flirt with Maya in the cafeteria, only to be interrupted when Misato appears and calls him out on attempting to hit on younger women. Kaji jokes around with the fact that she is acting so serious around him all of a sudden, but Misato replies that she cannot afford to be relaxed at the moment, and asks him what he knows about the Marduk Institute. In response, Kaji drops his jovial attitude and pulls Misato close, telling her in a hushed tone that the Institute does not actually exist, and that it is Nerv who are pulling the threads, telling her to look closer at code "A-2". Misato recognizes it as the name of Shinji, Asuka, and Rei's class, but before she can ask for further details, Shinji suddenly appears and tells her that Ritsuko is looking for her. Misato goes to meet Ritusko, but makes sure to tell Kaji that they are going to resume their talk later.

Shinji and Kaji go out, and discuss matters of life with each other. Kaji decides to Shinji one of hobbies, namely that he has a private patch of melons and flowers in the Geofront that he cares for. He tells Shinji that caring for something living is something that can learn you a lot of things. Shinji comments that it can bring suffering too, to which Kaji notices that he seems familiar with suffering and asks him if he has found something in his life he enjoys. When Shinji hesitates to answer, Kaji tells him that something can also be learned from suffering too, namely the value of being kind to others.

Shinji and the others participate in another sync test, and Ritsuko notices that his score is falling, and she suspects that it might have something to with what happened with the previous Angel. Misato worries about this, saying that it does not make telling him about the new pilot any easier.

The next school day, Toji is called in for a meeting with the principal. Kensuke asks what he has done to warrant such a meeting, but a puzzled Toji says he cannot think of anything. When Toji shows up at the principal's office, he is greeted by Ritsuko's voice. Meanwhile, Kensuke is having lunch with Shinji, and discusses some of the news and rumors about Nerv he has heard recently, such as the accident with Eva-04 and Eva-03's imminent arrival in Japan, and overtly tries to probe Shinji for more information on them. Shinji notices, somewhat to his frustration, that this is the first he has heard about these things.

Toji first comes back to class very late in the afternoon, looking usually downcast and thoughtful. Hikari, who has waited behind for him, reminds him that he is on clean-up duty. Toji says that he will take care of it after he has eaten, as he has missed lunch. Hikari takes the opportunity to ask him if he would be interested in having a homecooked lunch tomorrow, as she usually has leftovers from making lunches for her sisters. Much to her delight, Toji takes her up on her offer.

Back at Nerv, Asuka pays a visit to Kaji, but he absentmindedly tries to wave her off as he is busy with some work, saying that they can talk later. Asuka gets surly, and says that he somehow always seems to find time to talk with Misato, and then tries to embrace him from behind, much to his irritation. Asuka then catches a glimpse of his computer screen, noticing that it is a rapport on a new pilot. Asuka reads the name of the said pilot, and instantly gets upset, asking how he of all people could have been chosen as the Fourth Child.

The episode ends with Eva-03's take-off from America. Back in Tokyo-3, Hikari is cooking a meal, and a contemplative Toji making a free throw at the basketball court.