From EvaWiki
(Redirected from Angelic Days)
Jump to: navigation, search 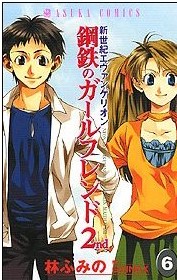 The Japanese cover for the Final Volume of GoS2.

The Manga version of the video game is at it's core, the same, although the some of the characters act different, and it also includes a backstory about Kaworu (who's a mysterious friend of Shinji's instead of a regular junior high student like in the Girlfriend of Steel 2) that isn't in the game. Shinji in this manga acts like his anime-counterpart while GoS2 video game Shinji acts like his Episode 26 counterpart. And although Shinji's love interests are Asuka and Rei (possibly Kaworu as well), Shinji ends up dating Asuka at volume 04's end. The Manga of Girlfriend of Steel 2 is 6 Volumes long. Volumes 1 through 4 deal with the events of the Game, Volume 5 is a backstory about Kaworu, Yui and Gendo's days in middle school, while Volume 6 is a flash forward to what happens after the events of Volume 4 when Shinji and the others are adults.

Differences between the original series and Angelic Days

Angelic Days is an alternate-universe reboot of the series, jumbling up characters and their situations in Shinji's dream world to the point that it bears little resemblance to the original series:

Shinji's story concludes at the end of volume four of the manga, when he becomes Asuka's boyfriend. Shinji choosing the Real-World as opposed to a world where he and the others are still children (this choice is given to him by Kaworu) causes Kaworu to disappear, both literally and even from the memories of the characters. Volume five chronicles Gendo's life as a junior high student with a young Yui; this volume elaborates more on Kaworu's background, as well. Volume six is a flash-forward after the events of volume four when Shinji and others are adults. This volume has stories of Misato & Kaji, Rei & Ritsuko, Hikari & Toji, and Shinji & Asuka; as well as two side stories, respectively.