According to the official report on the disaster by the United Nations, the massive explosion was the result of a meteorite impact that struck Mount Markham. Hence the event was dubbed "Second Impact" (as opposed to the "First Impact," the theorized massive meteorite collision 4 billion years ago that created the Moon. First Impact was actually caused by Lilith's arrival on Earth.[2]). The meteorite was supposedly too small to detect but was traveling at near the speed of light, resulting in it striking with tremendous force despite its size. 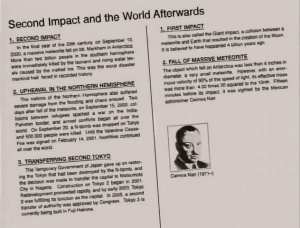