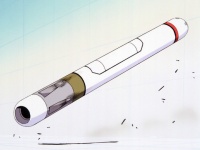 An entry plug is a long, capsule-shaped object that contains the cockpit (and by the extension, the pilot) for an Evangelion Unit.

Entry plugs are inserted into the spinal area of an Evangelion via a loading mechanism.[1] A section of the Eva's nape and upper back armor opens, allowing access to modified vertebrae. The entry plug is inserted through the spine, with the pilot's end of the capsule reaching down to the Eva's core. The plug finally spins inwards and locks itself into the Eva's torso, after which the armor is resealed.

During Eva activation, the pilot's entry plug is filled with the liquid LCL that provides oxygen for the pilot to breathe. The LCL is then "electrolysed," becoming completely transparent though remaining a liquid, thus allowing full synchronization between pilot and Eva. Following this, the entry plug's interior screens activate, giving the pilot an almost unimpeded 3D view of the Eva's surroundings.

The entry plugs feature a rocket-based ejection system. There are also systems for venting the plug's LCL in an emergency. Entry plugs appear to be immensely strong in construction. A notable example of this is when Rei's entry plug survived intact (although Rei did not survive) after Eva-00's self destruction in the battle against Armisael while most of Tokyo-3 was turned into a crater. Furthermore, Eva-01 took several seconds to crush the infected Eva-03's entry plug, and its pilot emerged still alive though injured. In Episode 05, Rei's entry plug is shown to survive being ejected after Eva-00's activation experiment went awry, and in Episode 06, even though the plug's exterior had begun to melt, Rei was rescued alive.

A stop signal plug is loaded into an Evangelion after the entry plug has been removed, when the Eva is no longer being operated[Source needed]. 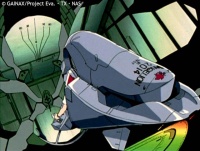 The pilot's view from inside a fully operational entry plug.

The pilot sits in a large seat-complex, which can be removed from the entry plug entirely by means of a large hatch on the exterior of the plug. There is also a smaller emergency escape hatch with interior and exterior handles. The pilot's only manual controls in the seat are the induction levers and their associated buttons. Apart from the main display, the pilot receives additional information via holographic HUDs which appear as needed. The "blind spots" in the pilot's main display canopy are actually an outline of the Eva's body.

The seats themselves feature a large "safety belt" device to fasten the pilot in place, but only Shinji wears this as a matter of course. The other pilots do not wear any restraints ordinarily, but Rei is shown wearing the fastener while firing the Positron Sniper Rifle in Episode 22.

In Episode 23, Rei is shown operating an elaborate self-destruct system, situated underneath the pilot's seat.

Other types of plugs

Standard entry plugs are white. However, those used in the remote control Dummy Plug system are red. Depending on whether the governing system is Nerv's or Seele's, the plugs with be labeled as Rei or Kaworu plugs respectively.

The interior workings of the dummy plugs is completely unknown, and whether the plugs are entirely digital, or somehow possess a biological component is a matter of speculation.

In Rebuild of Evangelion, the basic design of the entry plugs remain almost completely unchanged. However, certain functions of the plugs and the pilot's seat are elaborated on in more detail. The pilot's seat is now shown to be capable of moving up and down inside the plug, with the depth of the seat corresponding to plug depth. The entry plug ejection system appears again, and actually ends up being used in combat, but this time the existence of parachutes is explicitly shown. Eva-13 is also shown to feature a D-type entry system, featuring two entry plugs which are no longer inserted through the spine.

The dummy plug also returns in Rebuild, though in a much different form. The plug is coloured black and white, with luminous green patches. This time the dummy system appears to have nothing to do with Rei, coming instead from the mysterious Golgotha Base. After Eva-01 rejects it, this plug can be heard issuing a melodramatic wail.

The AAA Wunder possesses a spherical LCL-filled chamber which has many similarities to the entry plug system. Its Hirnstamm Tower appears to be a giant multi-pilot version of the entry plug pilot seat.