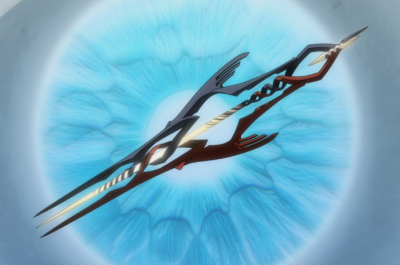 The Spear of Gaius

The Spear of Gaius (ガイウスの槍, lit. Gaiusu no yari) is the seventh Spear in the Rebuild of Evangelion tetralogy of movies. With the Spear of Longinus and the Spear of Cassius, it completes the trifecta to create the prominent Roman name Gaius Cassius Longinus. The Spear of Gaius is unique in having been built by Misato Katsuragi and Ritsuko Akagi out of the spinal linkage system of AAA Wunder using the scarce data generated in Additional Impact. Gaius is considered an entirely new Spear, and an "embodiment of humanity's will", thus making it entirely different from the six original Spears that Gendo Ikari explicitly states were sent by the "beings from another universe".

Gendo is visibly dismayed at the creation of the seventh Spear, calling it "regrettable" and stating that its existence was not supposed to have happened. Misato sacrifices her life in the explosion of AAA Wunder to allow the Spear of Gaius to appear, in miniaturized form, in Shinji Ikari's hands. Shinji eventually uses the Spear to initiate a "new beginning" or "Neon Genesis" and destroy all the Evangelions ever created.