MDWigs: Does anyone know how these elevators work? What do the numbers designate?

Reichu: Perhaps we can get a relatively decent idea by putting what the production drawings published in Newtype 100% Collection tell us together with various telling moments in the show itself…

Apparently, the first “number” here isn't actually a number — it's the letter “B” (even though it looks like a cheap LCD-display “8”). This is confirmed not only in the drawings, but in the show itself. Take episode #09, for instance. While she and Kaji are making out, Misato glances at the display plate, which stops at “8-09”: 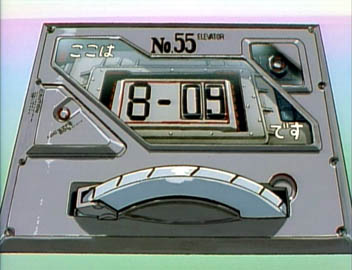 But on the wall outside, there's a nice display that shows that she's on Level B-09. (B-09 is written on the floor, as well, but I deprived you of that screenshot. Me bad.) 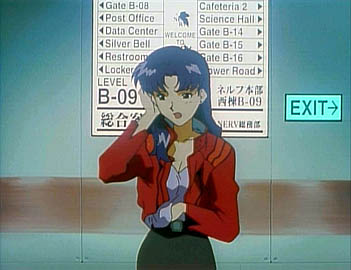 “Level” seems to imply that this is not just a station: this is an entire floor. Indeed, when we visit B-20 in episode #01, we can see all the way down to levels 30, 40, and beyond. (So the higher numbers are deeper underground.)

Also, the only evidence in NGE suggests that the elevators in Nerv HQ are pretty old-fashioned and thus only move in two directions: up and down. Studio Sokodei manipulated footage from episode #11 to get this idea across rather… playfully in ReDeath, but for you poor souls who haven't seen it, the shaft looks like so: 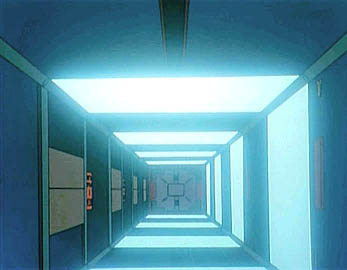 It would be my guess that, in Nerv HQ, you take the elevators to move vertically, the “people-movers” to move horizontally, and the escalators to move diagonally. ;;>

Now, what the heck does the “B” mean? It seems to indicate a subsection of Nerv HQ. If this blurry composite image I made of EVA-01's launch route is any indication, there are other sections in Nerv HQ with different letters before the hypen. Look at the left-hand “column”. (The yellow type is compensation for the horrid blurriness of the whole thing, and is hopefully more often right than wrong.) These little grey boxes, from the bottom up (above K-02, apparently a launch pad), are labeled B-23, B-15, B-13, and B-10 — ergo, they seem to correspond to levels of this “B section” where the character apparently spend most of their time (if the elevator plates we see throughout the series are any indication). The “B” stops are clustered together within a vertical column, and, judging from Misato's map in #01, the B section of Nerv HQ is probably be a large underground column with a hexagon-shaped cross-section. Note also how, as we observed in the octagonal open shaft, the higher numbers represent deeper levels.

But apparently there's more to Nerv HQ than the B part. In the launch route image, the next vertical section (of two “grey block” stops in width, above K-03 and K-04) is apparently “A”. Apart from “A” and “B”, though, HQ doesn't seem to be organized into clear-cut subsections. And ultimately, this all gets ridiculously confusing due to the fact that a “B-7” is above K-07, far away from the rest of “B”. So basically, Nerv HQ's layout must be madness; considering how much trouble Misato had getting around, us mere spectators don't stand a chance of understanding it!

While we're on the subject of Nerv HQ's layout, and since I've already brought up the Eva launch route image, we might as well get into some blatant theorization on that topic here, as well.

As we know, the Geofront is a large open space:

And when the Evas are launched, we see them traveling, apparently, up:

Since the Eva Cages are, like most of Nerv HQ, below the Geofront, where precisely are the launch route passages (seen in the image earlier) located? We certainly do not see any vertical chutes running through the open part of the Geofront!

HeWhoPostsStuff: Perhaps Nerv HQ's underground (as in, below the pyramid and such) facilities, as well as the above-ground Tokyo-3, extend beyond the Geofront's walls, and the shafts to the surface were simply installed someplace within the earth there, which would mean that the Cages would be someplace right below them.

Reichu: The relationship between the Geofront and Tokyo-3 is elaborated upon in this production drawing. However, being two-dimensional, what it tells us is somewhat limited.

HeWhoPostsStuff: Of course, this would mean that the Evas can't be deployed anywhere near the center of the city, but at least this could explain the presence of enclosed shafts.

Dr. Nick: That's how I see it, as well. Why are the ceiling buildings (the buildings located in the city's center) lowered down in combat mode? Because they are not combat-related buildings; they're just normal residential and office buildings.

Now, these city blocks that form the “ceiling city” are located at the point where the roof of the Geofront is at its thinnest. I think that when the HQ facilities were under construction, there was a big hole there through which they hoisted in all of those larger elements, like the frigate and such. For invading Angels on their way to Terminal Dogma, this is of course the easiest route, and that's why Nerv tries to intercept and kill the Angels outside the city center. If that defense line fails, the Evas are launched inside the Geofront; they don't want to damage the precious lid on top of their base by fighting there.

A large ring-shaped area around the city center is the “kill zone” where the Angels are intercepted. It's where the elevator routes lead and where the armament and power supply buildings are located. The launch chute route display shows that the chutes don't just lead straight up, but long distances are travelled sideways, too. In this respect, they more resemble railroad tracks than traditional elevator shafts. Some of these launch routes extend pretty far from Tokyo-3, all the way up to the surrounding hills; in the manga, a long-distance underground railway system is depicted.

Reichu: For whatever reason, the animators simply chose not to show us the “sideways” or “diagonal” portions of the Evas' launches…

Back to the launch route image: This seems to represent a symbolic simplification of the launch route system and the related structures, as opposed to an elevation (i.e., a true vertical cross-section). The grey blocks seem to be various destinations to which the Evas can be transported from the various Launch Pads (designated K-01, K-02, etc.). The grey blocks closer to the bottom appear to represent, as already noted, subsections of Nerv HQ. The “T-rooms” are perhaps the various experiment (“Testing”?) facilities, such as the one that Zerogouki trashed. The “dotted lines” might be giant ducts, such as the ones we see in #11. (Although what would those black rectangles represent?) The centered blue triangle a little more than halfway up might represent the Nerv HQ pyramid, and the destinations to the upper-left of that could be exit points on the Geofront itself (“145 woods”, “80 brige” [sp], “A street”, etc.).

The cluster of exits further up are apparently all surface-level: Street, boulevard, park, cemetery, bridge, parking lot, and so on. The weird thing is, EVA-01's route seems to go past one street and two boulevards before it gets to the Sachiel intercept point. The display makes it look like one roadway is on top of the other, but, as mentioned already, this obviously can't be the case, and it seems to support the notion that this diagram is symbolic rather than literal.