"Children" is a term used to refer to the 14 year old pilots of the Evangelions. The term is used even for a single pilot, hence Shinji Ikari is the "Third Children". The original Japanse dub of the series intentionally used "children" plural, and it is not a translation error. However, the official English dub by ADV films changed this to "Child" (i.e. "Third Child"), as they felt it sounded unnatural in English.

The children are supposedly chosen by the Marduk Institute, but in reality they are chosen by Nerv.

The numbering system is based on the order in which the Eva pilots were selected. Asuka enjoys taunting Shinji by referring to him as the "Third Children", pointing out that she is the "Second Children", as if being selected before Shinji somehow quantifiably makes her superior to him.

In the Rebuild of Evangelion series, the expression "(n)th Children" is not used. Instead, the pilots are referred to in terms such as Ichibanme no tekikakusha (一番目の適格者, "The First Qualified Person/Candidate") Dai Ichi no Shōjo (第一の少女, "First Girl"), Sanninme no kodomo (三人目の子供, "Third Child"), or Dai San no Shōnen (第三の少年, "Third Boy"). 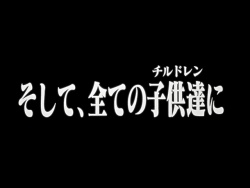 "And to all the Children..."
Retrieved from "https://wiki.evageeks.org/index.php?title=Children&oldid=99049"
Categories: