Where did Nuke go?

He got fed up with the Evageeks community and left for good.

Why is this wiki page still here?

Nuke kept it here for posterity. He also didn't feel like deleting his gigantic "how I got into Evangelion" screed.

Evangelion was my first true fandom. The series somehow sunk its fangs into me and just never let go. I've spent a while addicted to it, and it's not an addiction that I want to kick. The story of how I got into Evangelion is a very long one, and I never properly explained it in the forum for that very reason.

So, when I was a wee lad of about seven, my father downloaded an application that would select daily webcomics for him and display them in their own little window. Naturally, young me was interested in these. Every day, I would hoist myself into one of the giant chairs and read comics for around half an hour. After a few months of this, I got into the guts of the program. I discovered that there were comics that weren't being displayed. Of course, younger me had to have these. I opened all of the comics up to the application, and that was that. I went on to read all of them. Then, I came across a webcomic called CTRL+ALT+DEL. Check it out, it's awesome. I read it for a few weeks, until my mother caught me, deemed that it was "inappropriate", and uninstalled the app. I got bored and found other things to do, and the webcomic lay forgotten in some of the barren corners of my mind.

Yeah, I would have been pissed if I had been spoiled by this.

Fast forward to when I was twelve years old. I was patrolling the internet on my parent's laptop, when I came across the webcomic for the first time in five years. I happily started reading it again. Of course, I began to become irritated by all of the ads on the site. I was able to ignore them, but then one particularly annoying advert came along. This was advertising for something called Evangelion 1.0. I ignored the ad, but over the next month it grew more and more irritating. Finally, I said, "Oh, screw this," and clicked it. I was redirected to the first 8 minutes of Evangelion 1.0., sadly in English. That aside, talk about an instant hook. This was my first anime experience, I didn't care. It should be noted here that when I was searching for the first episode on youtube, I came across a video titled Asuka's Final Battle . I wisely ignored it and moved on.

After the 8 minutes that I watched, I had to have more. Mistakenly believing that what I had viewed was part of NGE, I went to youtube and found the rest of Episode 1 with subtitles. I watched it, crappy cliffhanger and all. From there, I went to Episode 2, then 3, until I had watched up through Episode 19. By this time, Jewish Holidays had come and gone, and I was the proud owner of a Platinum Edition copy of NGE. I finished the series on the DVDs, Director's Cuts and all.

I finished the series when I was twelve. My reaction was a resounding "What the fuck kind of ending was that?" Angered, I proceeded to watch the series again and was stunned out of my anger by realizing how deep certain parts of the series were. My irritation was gradually replaced by a sense of "ZOMFG THIS IS AWESOME". Then, I reached the end of the series again. I thought that I understood it a bit better, but I still thought that Anno had magnificently screwed up. It wasn't until June of that year that I found Death and Rebirth, as well as End of Evangelion.

When I discovered that there were parts of Eva that I hadn't watched, I dashed out to Blockbuster and picked them up on DVD. I shoved Death into my DVD player, got some popcorn and watched it. Really, I thought it was a glorified recap of the series. This edition didn't have any of EoE on it, for some reason. I mean, it was good; it just wasn't anything that new or interesting. I turned to EoE and put it into my player. Episode 25' began to play.

Part Six, or the second part of Part Five

Episode 25' blew me away. It was the end that I had secretly always wanted; it fulfilled every desire I had for the end of NGE. Granted, some of it was a tad much for my 12-year old brain; watching Shinji wanking over Asuka's comatose body was a lovely sight, as well as watching Maggot-ridden Asuka and the two parts of Misato's body go flying in opposite directions. Of course, I just stared at the screen in awe and watched on. Then Episode 25' ended. Since I was a respectful person, I sat through the credits while I made myself some more popcorn. Episode 26' started.

Part Seven, or the third part of Part Five 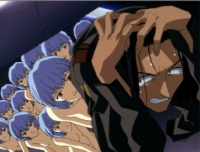 Yeah, that was my initial reaction too.

I really had no words for Episode 26'. It was a mindfuck, pure and simple. The animation was amazing and the plot... just WOW, but it crossed the line from "mildly disturbing" to "fuck this shit, we're going to blow up some heads". I still loved it, of course. Watching every event transpire as it did, watching GNR devour Shinji with the Vagina Eye, watching everybody explode into Tang... it was one of the coolest movies I had ever seen. Then, of course, we had the obligatory fucked-up ending. Shinji and Asuka. Beach. Strangulation. You know the drill by this point. I loved it all the same, but spent forever trying to understand it. That was when I visited Evageeks for the first time. It was just the wiki, which I used to search for the answers to all of my elusive questions. Two more years went by, with me introducing all of my friends to Eva. Finally, I decided that I would create an account on the Forum, just for the lulz. I did, became enamored with it, and I've been with y'all ever since. HERE ENDS THE STORY OF THE FANDOM.