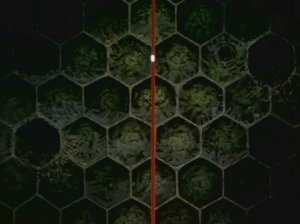 Terminal Dogma is the lowest, most secret level of Nerv headquarters. It is located deep below[1] Central Dogma accessible via. an Elevator, but only to those with the highest level of clearance (Gendo, Fuyutsuki, and Ritsuko Akagi). Within Terminal Dogma is the "LCL Production Plant" -- actually, it's the live Angel Lilith crucified to a giant cross, and impaled on the Spear of Longinus, Lilith's blood forming an entire lake of LCL. The Eva graveyard for failed prototype Evas, and the Dummy Plug Plant -- cloning facilities to produce copies of Rei Ayanami, are also located here.[2]