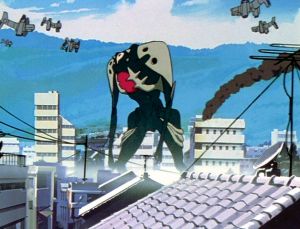 Heavy Fighter Jet-VTOLs represent the apex of military firepower in 2015, but they are no match for Angels...

Heavy Fighter Jet-VTOLs are gunships in use by military forces in the year 2015, flown by both the United Nations and Japanese Strategic Self Defense Force squadrons. Relying on VTOL (Vertical Take-Off and Landing) propulsion like earlier AV-8 Harrier jump-jets and rotor-bladed Bell-Boeing V-22 Osprey transport aircraft, these gunships are very maneuverable, capable of hovering as well as circling around a target, and even reversing. They achieve their VTOL abilities through use of two tiltable jet engines, located at the end of their stubby wings.

Like earlier helicopter gunships such as the Bell AH-1 Cobra, the Boeing AH-64 Apache and the large Russian Mil Mi-24 Hind, these HF VTOL gunships also have underside hardpoints below their wings for attaching and carrying weaponry, such as folding-fin rockets, guided missiles, gun pods and others.

In addition to JSSDF (painted in olive drab camouflage) and United Nations (in white and orange) variants, Nerv also possesses and operates unarmed civilian versions with the weapon hardpoints deleted, an extended canopy, additional seating, cargo space and a different color scheme, as a number of them are mainly used for transport and medevac purposes.

However, despite their impressive firepower and position at the pinnacle of current military technology, HF VTOLs are still conventional weapons, incapable of penetrating A.T. Fields. 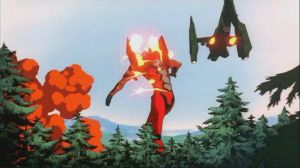 Thus, they are almost completely ineffective against both Angels and Evangelions, which swat them down almost like toys.

In Evangelion 1.0: You Are (Not) Alone, this combat aircraft is designated as YAGR-3B Close Air Support VTOL Aircraft.