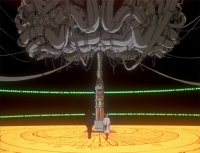 Rei soaks in the LCL tube in the dummy plug plant.

The Dummy Plug Plant, or Deep Underground Facility: Central Area, is a room deep within the bowels of Central Dogma that is used to house the soulless Rei vessels that are said to be the cores of the Dummy System.

The arrangement of the "brain", the "spinal column", and the tank of LCL in this room is possibly supposed to resemble a primitive version of the Evangelions' entry plug system. The brain-like object in the metallic casing is possibly a product of the same technology as the "brain" in the Magi system.

During episode 23 Ritsuko destroys the soulless Rei clones by initiating "Destrudo Release", which causes them to disintegrate. 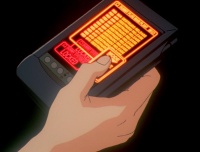 We do know that when she destroys the Reis, the display on Ritsuko's controller is showing a Rei list that starts with Rei 4, so it seems that the dummy plugs do not have clones physically inside them (Reis 1-3 are all accounted for). Thus one of NGE's biggest unanswered questions is: "How does destroying the tank Reis destroy the dummy system?" We don't know if this simply means there will be no additional dummy plugs, or if somehow the systems that have already been installed in the Evas, and the plugs that have already been manufactured have been disabled. It also doesn't tell us why, even in the absence of the Rei tank, they couldn't continue to program the dummy system using Rei 3.

The figure on the floor of the D.P.P.

Reproduced image of the glyph in the D.P.P.

The outer section of the glyph on the floor of the Dummy Plug Plant is from MSS. 2731, a part of the Sloane collection of the British Library. It contains 4 books, 3 of which give instructions for the conjuration of spirits. The relevant glyph in the Dummy Plug Plant is from the first book, titled Ars Theurgia Goetia, and is used as magic circle in which the magician stands in order to be preserved from the spirit's influence.

Within the ring are written Divine Names in Romanised Hebrew that are split into nine sections. Each of the nine sections contains Names commonly allotted onto the relevant Numbers of the Qabalistic Tree of Life.