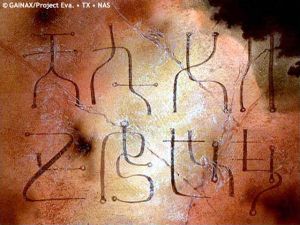 The Dead Sea Scrolls is the in-universe name for a set of documents that serve as the primary guide and philosophy of Seele. Little is known about them, except for what Seele alludes to during their meetings and what is stated in the Classified Information section of the Neon Genesis Evangelion 2 video game.

It is known that the Scrolls are of extraterrestrial origin and that they serve as a manual on the use and purposes of the contents of Black/White Moon's: a Seed of Life and the Spear of Longinus.[1]. They detail rules on how to use these items, and are often referred to as prophecy; to the extent of the order and times of release of the Angels.

Seele possessed vast wealth and power, and being founded as a religious organisation, they funded investigations into relics of their faith. This culminated with the excavation of the Dead Sea Scrolls. The irrelevant discoveries were released to the public as the Dead Sea Scrolls, while the Secret Dead Sea Scrolls were kept by Seele. They would later be used to put their ultimate plans of a Second and Third Impact, followed by Instrumentality.

The real Dead Sea Scrolls were discovered in eleven caves at Qumran in 1947 on the northwestern shore of the Dead Sea. The texts are mostly fragmented, with the exception of a few relatively intact scripts. Scripts and script fragments are numbered according to the cave they were found in. A number of scrolls are in Hebrew, while others are in the Aramaic language. Fragments of every book of the Old Testament, except for the book of Esther, have been found among the Dead Sea Scrolls.[2]

A number of Dead Sea Scrolls, while classified at the time of Evangelion's production, have since been made available to the public. As such, the mystery surrounding their contents has disappeared.[3]