From EvaWiki
(Redirected from Over the Rainbow)
Jump to: navigation, search 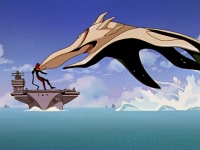 Over the Rainbow and Eva-02 getting into trouble

The United Nations Pacific Fleet is seen escorting Eva-02 (And secretly transporting the Adam embryo as well) from Sasebo to New Yokosuka in Episode 08, where it suffers severe losses during the attack of the Sixth Angel, Gaghiel. While real-world United Nations forces are actually under the control of their member nations and not directly under the U.N., this arrangement appears to have changed in the world of Neon Genesis Evangelion post-Second Impact. Although the warships of the Pacific Fleet are referred to by the countries that built them, as evidenced in Episode 14, the Fleet as a whole appears to be in the command of the U.N. itself. The Commanding Officer of the aircraft carrier Over the Rainbow refers to the fleet as the "U.N. Navy".

The combined United Nations Pacific Fleet contains vessels from both Western bloc and Eastern bloc nations, including four American Iowa-class battleships, at least one Kirov-class battlecruiser, an Admiral Kuznetsov-class aircraft carrier and the Kiev-class carrier Novorossiysk (Kensuke describes seeing "five carriers and four battleships"). Smaller vessels include Hatsuyuki-class destroyers, Oliver Hazard Perry class frigates and Alreigh Burke/Kongo class guided missile destroyers. Although some vessels carry their old names (Kirov is unusual in retaining its Soviet name, considering it had been renamed Admiral Ushakov after the fall of the Soviet Union), most have been renamed, such as the Over the Rainbow itself (Formerly USS Harry S. Truman-see notes) and several other ships named after Shakespeare's plays.

Over the Rainbow is a nuclear-powered aircraft carrier, "pride of the United Nations Forces". It served as the command ship for the massive naval convoy formed from the UN Pacific Fleet which escorted Evangelion Unit-02 as it was being transported from Germany to Japan in Episode 08. According to Kensuke, it was built before Second Impact in 2000. The carrier serves as the power supply for Eva-02 in the episode and, to the dismay of its Captain, its flight deck briefly becomes an arena for the brawl between Eva-02 and Gaghiel.