The Neon Genesis Evangelion Collector's Discs, released starting in February of 1996, are a 6 volume set of CD-ROMs that can be viewed on Windows and Macintosh computers and were sold for ¥6800 per volume. Each of the discs contain various Evangelion related multimedia including images, wallpapers, sound/voice clips, screensavers, and mini-games/utilities. The contents of each volume are split into 4 headings. 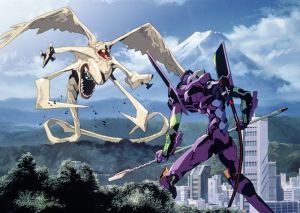 The primary content on the discs were high quality, 24bit color images in PICT, BMP, and JPEG formats ranging from 640x480, 1024x768, and 2048x1536 JPEGs. The several hundred images that span the 6 volumes range from custom art, images taken from the series, scans of cell artwork, and indexing images. There is also a Japanese text file that lists where some of the images first appeared.

The sounds and dialog come in either AIFF, SND, or WAV format sampled at 22khz and 44khz. These include various dialog and sound effects from the show. The voice clips are arranged by character.

The first two volumes contains Windows screensavers and the second volume contains Macintosh After Dark data files. Most of the screensavers are slideshows of images as well as one with Pen²) walking across the screen.

Extra sounds and images, small utilities, and mini-games are contained here, such as Pen² following the mouse around and a shutdown timer.