Misato's Car is a Renault Alpine A310, a French-made rear engined sports car that was in production from 1971 to 1985. It's most likely that the model Misato drives is the 1600 VE series in production between 1971 to 1974. It originally came equipped with a 1.6L inline 4 cylinder engine producing about 125 horsepower fed by 2 double barrel carburettors and a manual 5 speed transmission. Another possibility is an A310 from circa 1981, a V6 Series 1 or 2 in production between 1977 to 1985. The A310 V6 Series 1 and Series 2 cars were restyled by Robert Opron and had separate compartments for its left and right front headlamps, larger fender flares and lacked the inlets on the left and right of the front storage compartment, while Misato's car had the older smaller flared fenders, the original headlamp assembly that was continuous and the 2 inlets. However, the production drawings for her car label it as A310 Custom which doesn't designate any kind of body type, but it clearly had the styling of the older body types of the 4 cylinder A310's, regardless of what was under its hood.

Aside from the misplacement of the inlets on either side of the front storage compartment, there are a few other differences between Misato's car and the original A310. Every A310 ever made had the steering wheel on the left hand side, but it's possible to fairly easily modify the column to the right hand side since the engine and components are in the rear of the car. Another major difference is that apparently, Misato's car is an electric. There is a shot from Episode 01 of the back seat filled with batteries and Misato says that they needed a working car. Another difference is the shifter on Misato's A310, which looks to be a sequential shifter, whereas the original A310's had manual 5 speeds (manual 4 speeds on some of the V6 Series 1's). It's possible the transmission was swapped to a more modern one when the car was modified from a left side driver to a right side driver. 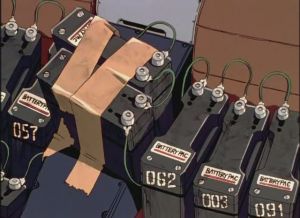 The batteries for Misato's car 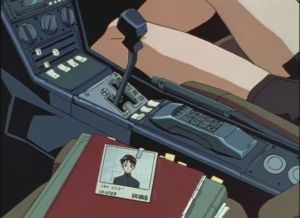 The sequential shifter in Misato's car

In Rebuild of Evangelion, Misato also drives a white Mazda Cosmo Sport 110 (with a red racing stripe). The Mazda Cosmo series of sport coupes went through 4 generations of production from 1967 to 1995, with drastic changes in both body styling and specs. The car that Misato drives in Evangelion 2.0 is the first generation which ran from 1967 to 1972. The first generation of Cosmos are divided into 2 series, Series I and Series II, which has more horsepower, but the styling remained mostly the same (Series II has a larger front grille); Misato drives the 1971 Series II. The Mazda Cosmo 110s uses a rotary engine (or Wankel Engine) and in the movie, you can clearly hear that it is a gasoline burning engine as opposed to her Renault. It's possible that Hideaki Anno, being a fan, purposely used the Mazda Cosmo as a nod to Return of Ultraman, where the car was often featured.

The details in the movie are so accurate, that even the interior of the car is replicated down to the bolts on the base of the gear shifter.

The interior of the Mazda Cosmo 110S

The interior of Misato's car from 2.0
Retrieved from "https://wiki.evageeks.org/index.php?title=Misato%27s_Car&oldid=76817"
Category: