Episode 7 gives us a few glimpses of Jet Alone's system console. In both instances, the screen shows a number of initialization messages which resemble the boot process of a regular PC.

Cut 147B takes place taken right before the beginning of Jet Alone's official demonstration. At this point, the system software had already been compromised by Nerv operatives. The later Cut 322 shows some kind of "recovery mode", as Jet Alone's systems are shutting down and restarting just in time to avoid the catastrophic meltdown of the reactor's core. 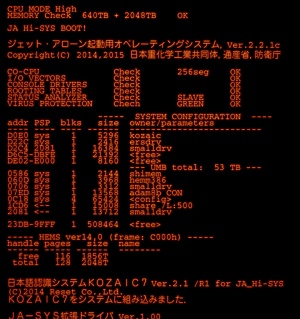 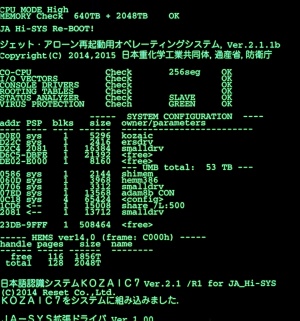 The contents of both screens are almost identical. The small differences between them will be pointed out below.

At a first glance, the image looks very similar to a screen-capture taken from a standard MS-DOS computer. A few lines of plausibly-sounding technobabble ("STATUS ANALYZER"!) have been added for greater effect.

The middle part of the screen resembles the output of the MEM memory diagnostic tool. Most well-known MS-DOS programs listed here are immediately recognizable, even if their names have been altered slightly. Some of the hexadecimal addresses shown on the left have been changed as well.

Fortunately, whoever created this image left behind a big clue:

This is the the BIOS memory test from a NEC PC-9800. More precisely, this text strongly resembles the first two lines of text that appear on the screen after turning on the machine.

Once the test is complete, the computer will clear the screen and proceed booting DOS. There is no way to capture these two lines from the machine itself, so they must have been included here on purpose.

The PC-9800 is a series of personal computers built by NEC that was hugely popular in Japan from the 80s to the mid-90s. Those machines were quite similar to, but largely incompatible with, the IBM PC[1]. They ran customized versions of Microsoft's DOS and included special hardware to support Japanese fonts. Later models used more conventional PC hardware and ran Windows unmodified.

Their main competitors in the Japanese market were the more advanced but slightly later Sharp X68000 and Fujitsu FM Towns. They were all eventually replaced by standard IBM-compatible PCs once later DOS versions (and eventually Windows) made specially-designed Japanese font hardware obsolete. A few models were exported to the West, but disappeared quickly from the market, crushed by the inferior but vastly cheaper PC-clones.

The advanced graphics of early PC-9800 made them popular for many games and early visual novels. (Notably, the early Touhou games were PC-9800 exclusives.) For this reason, a dedicated community has over time produced a small selection of high-quality emulators, and a large number of patches, guides and HOWTOs.

As stated above, this is the memory check performed during the startup of a PC-9801. It's analogous to the memory check which older PC BIOSes used to run during POST. Of course, the real machine measured memory in KB rather than TB.

"CPU MODE High" appears to be a non-standard term for "protected mode"[2]. This means that the processor installed in the machine is at least an Intel 80286, or a compatible equivalent. Note that NEC used their own x86 CPU clones (V20 and V30) in most of their machines.

This text is almost certainly derived from the standard Microsoft / NEC copyright notice shown early in the PC-9801 boot sequence:

Unfortunately, most of this is just random gibberish. MS-DOS is a single processor OS by design, so the presence of a "CO-CPU" is extremely unlikely. [3]

"ROOTING TABLES" is more interesting. Together with the reference to TCP/IP in Episode 23, it means that whoever worked on this image had a cutting-edge knowledge of networking by 1995 standards, even for a home computer-centric software house like GAINAX[4]. Evangelion started airing in October, just a few months after the release of Windows 95[5], which only shipped with limited local networking installed by default. The internet and TCP/IP became widely known only a few years later. 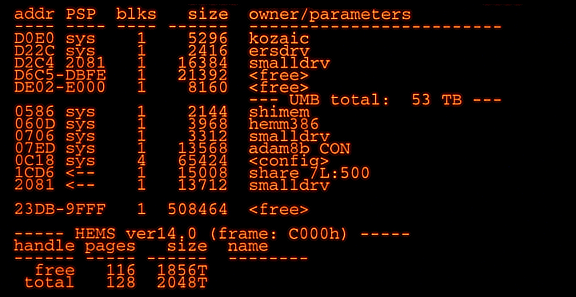 This a list of programs, drivers and system modules currently loaded in the system, showing the memory blocks allocated to each one. A number of different diagnostic tools were popular in the DOS days, as the limitations of the x86 architecture and of DOS itself made optimizing the memory usage of the system a priority. Microsoft's DOS included one of these tools, called simply MEM.

The output of this program looks fairly similar to that of MEM (example from MS-DOS 6.22), but it's significantly more detailed. Extensive searches on the Japanese web brought to light an obscure tool called VMAP.COM, whose output matches almost exactly what appears on the screen in Episode 7: 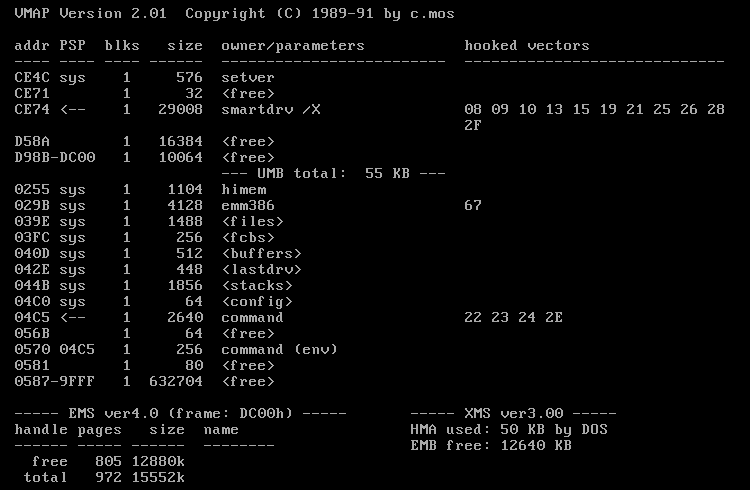 Though VMAP appears to be almost completely unknown outside Japan, it is fortunately still available online. Note that, as a well-behaved[6] DOS program, VMAP will run correctly on PC-9800s, regular IBM PCs, and DOS sessions under Windows.

Some of the programs which appear in this list:

Here, KOZAIC7 is apparently J.A.'s specialized input method. An input method, also generally known as IME, is a program (most often integrated into an operating system) that allows an user to input text in a language which uses a complex script by using a regular keyboard or specialized gestures.

As an example, Misato is seen using a very simple IME (...KOZAIC7?) in Scene 9 of the same episode.

KOZAIC7's initialization messages closely resemble those of JustSystems's ATOK, one of the most common IME used on a variety of older Japanese PCs. Keisuke ABE's Thinking about Japanese input programs page shows ATOK7 (1989) running, incidentally, on a PC-9800:

Here, the VMAP dump above gives us one more hint. According to a random 2ch thread titled What's your "config.sys"? from 2001, the mysterious "adam8b CON" line above

matches exactly the size of the UMB allocated by "atok8b"

which appears to be one of the modules loaded by the newer ATOK8 (1993). Once again, from ABE's page:

Note that J.A.'s screen shows one more line of text. A capture from a real PC-9821 shows:

Many DOS device drivers and TSRs used to print a similar messages once they loaded successfully. Loading too many programs or simply loading them in the wrong order could exhaust the few available upper memory blocks and cause them to fail.

Side note: obviously, IMEs appear quite often on the fictional computer screens shown in anime series. It shouldn't be a surprise that some IME developers are also anime fans - the most widely used IME on the Linux desktop is actually named after a character from one of Kunihiko Ikuhara's TV series[7]. Yes, the same Ikuhara we see referenced in Episode 7!

Differences between the two screens

"Startup Operating System" -> "Restart Operating System". The phrasing is weird in both instances even in the original Japanese, suggesting that somehow both "startup task" and "restart task" are attributes of "Operating System", rather than both being stages of the operation of an OS ("Operating system start").

It's worth noting that many real-life embedded systems use a similar fallback boot strategy, running a main copy of the operating system during normal usage while being able to revert to a separate, older copy of the same OS in case of a serious runtime error or a previous boot failure.