ENDING THEME
FLY ME TO THE MOON

The Only FMTTM Guide You'll Ever Need!

The pre-Renewal releases of Evangelion (the original televised — or OA — version and LD/video version) had multiple versions of this song that it would use for the end credits of different episodes. However, for the Renewal DVD release, even more new versions were created: some edits of versions previously released to album, others completely new (the vocal tracks, anyway). In the Renewal, every episode has a unique version of FMTTM for its ED (or, at least, was supposed to… see the endnotes). It's quite a mess, so here's a concise guide to exactly which versions of FMTTM are used in both the original and Renewal versions of the series. Hopefully, it will be the final word on the matter.

Reichu: First off, some general info: a short Wiki article on the song and a eulogy for its composer.

thewayneiac: This song also has an intro that most singers, including Sinatra, don't bother singing. (Perry Como included it in his version):

-intro-
Poets often use many words to say a simple thing.
It takes thought and rhyme to make a poem sing.
With words and with music I've been playing.
For you I have written this song.
To make sure you understand what I'm saying.
I'll translate as I go along…


In some ways, the song makes more sense with this intro: The “in other words” parts are the singer ‘translating as he goes along’.

Reichu: NGE is notorious for its habit of remixing and rearranging its ending theme, and rightfully so. (12 of the tracks on the third soundtrack are FMTTM remixes!)

Quiddity: Space Runaway Ideon, one of NGE's influences, also featured a large number of remixes of the ending theme, particularly in the movie version. However, in Evangelion, the vast majority of those remixes included singing, with only a few being instrumentals. In Ideon, all the remixes were instrumental only and the only track with singing in it was the actual ending theme itself.

Reichu: There are actually a ridiculous number of instrumental FMTTMs if you count all of the unused versions included with S² Works, though.

MDWigs: Apparently Anno originally wanted to make a different opening for each episode (sort of like how different versions of the ending theme song were created for *most* episodes in the original release and for all in Renewal). He couldn't in the end, though, because of scheduling issues. When the Genesis releases came around, Anno again wanted to do different openings (as he was fixing up a lot of things from the first screening), but that didn't eventuate either.

I remember reading somewhere that Anno asked Megumi Hayashibara to sing the <Rei(#26) TV.Size Version> rendition “like the previous one, but imagine yourself strangling a little cat with a big smile on your face”. Yes… Anno is weird. Also, the difference between the Rei(#5)TV. Size Remix Version and the Rei(#6)TV. Size Remix Version is that Anno directed Hayashibara to sing as Rei Ayanami for #5 and as a “unified person of Rei and Megumi Hayashibara” for #6.

Reichu: Changing rather less often than the version of FMTTM used is the color scheme for the actual animation.

FYI, the moon is steadily rising over the course of the credits. This actually took me a ridiculously long time to notice. >_<'

The Eva Monkey: Some would criticise this ending animation for being dull and generic, but there is something striking about animating something as simple as a moon moving across a sky. Not to mention that it is the precursor to the sunset ending animation for Death and Rebirth, which is arguably one of the most beautiful credits sequences in anime.

Reichu: In my experience, the choice of ending song seems to divide fans pretty evenly — either they love it or they hate it. To be sure, hearing a famous 50's American pop song after each episode of a Japanese sci-fi anime can be slightly jarring, at least at first glance. (The various Engrish renditions of it don't help matters much!) I do find myself wondering why Anno chose this particular song, as opposed to having an original ending theme created, or what have you.

HeWhoPostsStuff: Believe it or not, I've always been under the impression that “FMttM” is a surprisingly good fit into Eva 's soundtrack, not only in terms of its evocations, but its musical style as well. I've always perceived Eva 's soundtrack as rather “retrospective” in nature, and possessing several similarities to songs from the Sinatra/Big Band era. For instance, listen to "Misato," Barefoot in the Park," or "Waking Up in the Morning," as well as others: Those just ooze 40's–50's “lounge” sounds. Many other tracks, while not as obviously influenced by the era, still have a decidedly “symphonic” feel to them, while rather few “modern”-sounding tunes are found on the entire soundtrack. Others might disagree with my perceptions, but that's always been the way I've been inclined to hear Eva 's music as a whole, and from that perspective I tend to think of “Fly Me” as a decent fit.

tv33: I don't think the song has much significant to the series as far the lyrics go; it's rather “mushy” for a series like Eva. Some of the versions do sound quite nice, though, and the song has become closely associated with the series for anime fans.

The Eva Monkey: Aside from the ending theme complimenting well with the existing music, it also (when coupled with the imagery in the ending animation) plays upon the correlation between Rei and the Moon.

Shin-seiki: The Moon is, of course, linked visually to Rei repeatedly throughout the series. 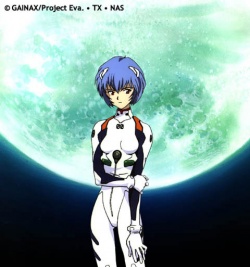 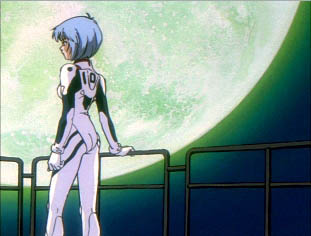 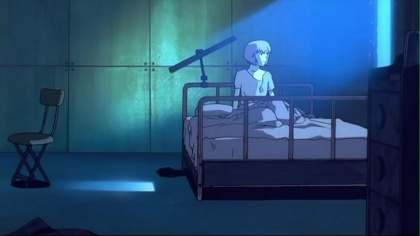 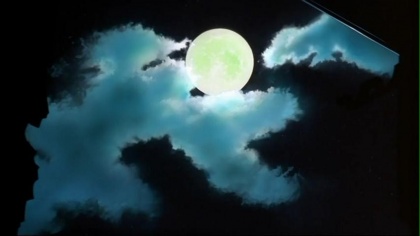 This may be intended as a subtle, but persistent, hint at Rei's origin and true nature, as we are told that the Moon was formed during the First, or “Giant”, Impact four billion years ago, and later, it is suggested that First Impact correlates with the arrival of the Seeds of Life (i.e., the White Moon of Adam and the Black Moon of Lilith, which are the first and second “Geofronts” in Antartica and Hakone, Japan, respectively) on Earth.

The background image of moonlight on water (from an underwater perspective) brings to mind the words of Ritsuko in #23:

"Light and water, which make up Rei's deep mentality, reflect the image of this place.”

The image of water and moon also may also portend the way things turn out in the end: 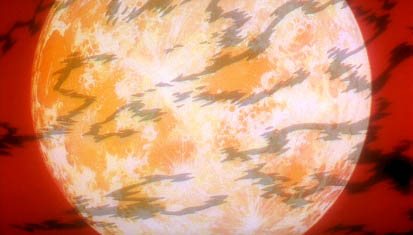 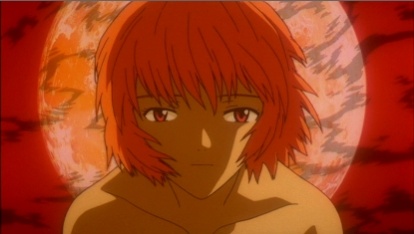 Note how here, they are at once both ‘underwater’ and ‘on the moon’: 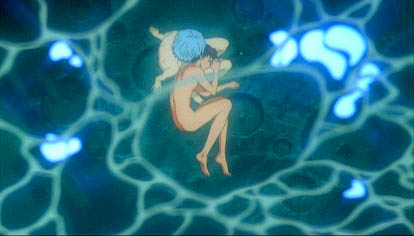 Finally, there is Rei herself. I don't attach any particular meaning to her being upside-down; I figure it's more for compositional purposes than anything else. Similarly, she is rotating to make the otherwise static image more visually interesting. I tend to connect in my mind the image of Rei here with this shot from episode #25′ myself, even though she isn't upside-down.

HeWhoPostsStuff: In all honesty, you're probably right about why she is upside-down, but, just from a personal perspective, it gives me the impression that Rei (or her image, anyways) in this sequence has no control whatsoever over what's going on, as if she's trapped in some sort of free fall. If the sequence was flipped right-side up, it'd look (at least to me) more as if she was ascending upwards. Somehow I can't help but think of EoE, wherein Rei con Lilith at first ascends up into the atmosphere someplace, but in the end comes plummeting back down to Earth… Perhaps a bit too far-fetched to be a very plausible connection, though.

However, I DO have to make a reference to the OP sequence, in which Rei and Asuka's silhouettes are seen ascending/descending on opposite sides of the screen, with Shinji in the middle:

Reichu: If it is at all meaningful, the image of Rei “free-falling” can also be found in #14 and #25. Interestingly, both of these sequences reference the image of the Moon from the ED, as well.

The Eva Monkey: The Moon is also considered a symbol for destiny. But more importantly, Rei — as Lilith — will eventually collect the souls of all living things into her Black Moon in the Third Impact. This is very similar to the old folklore of a the Moon traveling across the night sky and filling with the souls of the dead, referring to the waxing and waning of the Moon.

thewayneiac: The choice of this song seems to indicate that they already knew what all those little red dots would be doing during 3I.

HeWhoPostsStuff: The “moon” in the song might as well be equated with the Black Moon instead of the “regular” Moon, seeing as in the end everyone “flies” there, at least for a little while… Sort of a slightly twisted play on words by Gainax, heh.

MDWigs: One obtuse Rei-Moon connection is the fact that, according to Anno, Rei is actually named for Rei Hino, a character from Sailor Moon.

Also regarding the Moon's significance in NGE: In the original scenarios for the episodes, episode #24 was supposed to feature the twelve most powerful Angels descending from the moon and destroying America.

Reichu: Destroying America? At least in the final show, they go from destroying us to simply showing how incompetent/paranoid we are. That's America, baby!