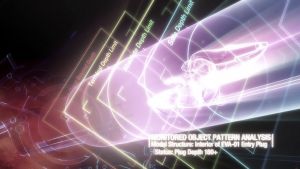 Shinji Ikari moving toward the "Great Beyond Depth"

The concept of Plug depth is present in Neon Genesis Evangelion, although precisely what it denotes is ambiguous. Since there is no indication that the interior arrays in NGE can move, "plug depth" may simply refer to the proximity of the entire entry plug to the core.

In the Rebuild continuity, plug depth designates the proximity of the entry plug's interior array to the Evangelion's core. The internal array of the entry plug, upon which the pilot is seated, can move up and down the entry plug on a track and go closer to or further from the core. The movement depends on various conditions, such as excessive synchronization or a backdoor entry into the Evangelion unit. An Evangelion entering berserker mode can also cause the internal array to drop. The violation of the acceptable safe depth purportedly threatens the humanity of the pilot.

In Evangelion 2.0, three incidents involving excessive plug depth occur. Asuka Shikinami Langley's activation test puts her in close contact with the 9th Angel which results in some form of contamination, but otherwise leaves her human form intact. Mari Makinami Illustrious subjects herself to a negative plug depth when engaging Eva-02's Beast Mode through a coded back door, but emerges only with sympathetic injuries. However, upon unleashing Eva-01's inner power and moving toward the "Great Beyond Depth", Shinji Ikari transforms into a radiant being beyond physical laws. He is later said to be absorbed into the Eva.