Misato Katsuragi's apartment is located in an apartment block fairly distant from the city center of Tokyo-3. The rest of the apartment block has either been completely abandoned or is simply unoccupied, as Misato's is the only veranda with furniture and her's are the only lights we ever see on in the building. 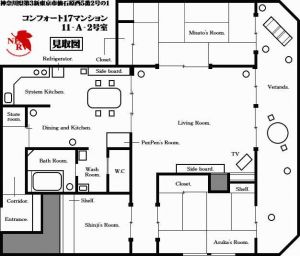 The floorplan of Misato's apartment.

The apartment is where Misato is free to be her true, more relaxed self around the Children, amongst others. During Episode 01 only Misato and Pen2 lived in it having recently moved in, and as a result of Misato's sloppiness was in a complete mess. During Episode 02 Shinji moves in, followed by Asuka during Episode 09.

Most of the non-combat scenes between Shinji, Misato and Asuka are set in the apartment. This includes some of the lighter aspects of the show- Asuka and Shinji training to "synchronize" with each other, as seen during Episode 09, as well as the (in)famous toothpick scene in Episode 02.

It should be kept in mind that Asuka's room was previously Shinji's before she moved in. Shinji is relocated to the supply closet across the hall. The Wall of Jericho scene takes place between the living room and Misato's bedroom. Although Pen2's refrigerated "room" has a television and lamp within it, these are not marked on the map. Misato's closet and desk (both on the far north wall) are also not marked on the map.