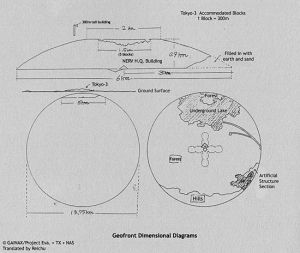 Dimensions of the Geofront at Hakone

"GeoFront" is the publicly used term to describe a massive subterranean cavity, specifically the GeoFront underneath Tokyo-3 (site of pre-Second Impact Hakone). However, unknown to the public is that the GeoFront is actually not a naturally occurring structure, but the "Black Moon" of the Angel Lilith. Also unrevealed to the public was that there was actually another GeoFront discovered in Antarctica, identical to the first: the "White Moon" of Adam. The Nerv Headquarters building complex was built in the center of the GeoFront, and indeed the entire Nerv HQ complex and support city of Tokyo-3 were built in Hakone so that they could be constructed around the GeoFront, containing Lilith.

The GeoFront was originally a massive sphere, 13.75 km in diameter, though over time it filled with earth and debris from landslides; by the present day, only a small fraction at the top has not been buried, which forms a dome-shaped cavern underground. When Nerv HQ was being built, some further excavation was performed to add in access tunnels, monorails and car trains leading to the surface, etc.

The dome-shaped cavern which constitutes the GeoFront in the present day is 6 km in diameter and 900 meters high in the center at its highest point. The very top of the cavern does not curve up to a point, but has been flattened out into a smooth 2 km wide disk centered in the roof which the sides curve up towards. Within the center of this flattened disk is the "Ceiling City" of Tokyo-3's movable buildings poking downwards as they are retracted below the surface, which is itself 1.5 km in diameter. The top of the cavern does not reach almost up to ground level, but is some distance below the surface; between the surface and the top of the cavern are 22 layers of plate armor, to defend the Nerv base below. Thus it may be that the bottom floor of the GeoFront cavern is roughly ~1,000 meters below ground level.

Forests of trees were planted throughout the GeoFront along with grass, and an artificial lake was created (which a Nerv patrol cruiser floats in) on one edge of the cavern, to simulate above-ground conditions for those working below. Reflecting mirrors on the surface channel sunlight through large windows in the surface of the cavern, resulting in real sunlight filtering down into the GeoFront along with a day/night cycle.

The exact center of the cavern is actually the deep trench (shaped like an inverted pyramid) which levels of the Nerv HQ building descend into (Nerv HQ contains numerous levels below the "floor level" of the GeoFront cavern, thus forming underground installations below an already subterranean cavern). The above floor level pyramid-shaped Nerv HQ building is located slightly off-center, extending off of the central trench, towards the side of the cavern containing the artificial lake. The side of the cavern opposite the artificial lake was not fully excavated, so instead of the roof of the cavern smoothly curving to the floor, the ground level rises to meet it in a series of elevated hills. As a result, while the diameter of the cavern is 6 km along most cross-sections, the side with the hills is somewhat shortened so that the length of the cavern running from the hells to the lake-side wall is perhaps only 5 km.