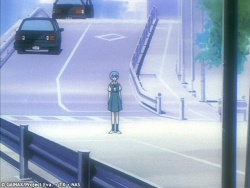 The "Image of Rei" Shinji sees at the start of Episode 01.

In Episode 01, Shinji sees a "vision" of Rei standing in the road wearing her school uniform soon after he is introduced, right before Misato arrives in her car to pick him up. Obviously this couldn't have been the "real" Rei simply physically traveling from Shinji's position to Tokyo-3, as Rei has been seriously injured and is at Nerv HQ (wearing her plug suit) under constant medical surveillance. This shot effectively forms half of two "bookends" for the series: when Shinji comes to Tokyo-3 here he sees a vision of Rei wearing her school uniform, and in the penultimate scene of The End of Evangelion, Shinji sees a vision of Rei wearing her school uniform standing over the Sea of LCL after Instrumentality's rejected (and after Lilith has physically died) which then vanishes. What "really happened" in this appearance of Rei?

It's unclear exactly what was happening in these conversations, but there are clues that suggest an explanation for Rei's appearance to Shinji in Ep.01.

The "Figure of Rei" Shinji sees at the end of Episode 26'.
Retrieved from "https://wiki.evageeks.org/index.php?title=Theory_and_Analysis:Rei%27s_Ghostly_Appearances_and_Quantum_Mechanics&oldid=103775"
Categories: