Sachiel (katakana: サキエル) is the Third Angel, and the first to appear in the 15 years since Second Impact. 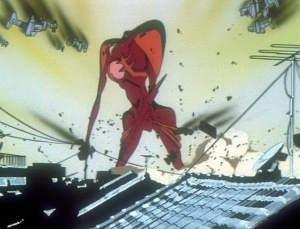 The more refined version of Sachiel's design ("Version A") depicts the "ribs" and "scapular carapace" as three separate units, although many cuts in the anime use a version ("B") where they form one combined structure. (This "Design B" is also used by Sadamoto in the manga.) One other discrepancy is that, in B, both right and left "ribs" possess an upper bone-spur, whereas in A this feature is only present on the left (and confirmably absent from the start)

While Misato retrieves Shinji by car, Rei pilots Eva-01 and confronts Sachiel. During this encounter, Sachiel is depicted as being fairly nimble. 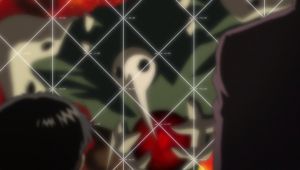 "The angels are back" 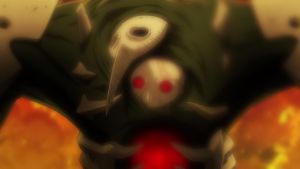 Sachiel appears in Evangelion 1.0: You Are (Not) Alone, largely in a reiteration of its anime role. There are no apparent modifications to the Angel's design, although its blood is now red (as opposed to blue). One minor addition is that of a halo that appears above its head when it makes an A.T. Field assisted jump. Another is that the eyes in Sachiel's second face glow bright red, first when the new face emerges, and again when casting its A.T. Field against Eva-01 and finally before dying.

In the Rebuild 1.11 DVD release, Sachiel is depicted with huge red boils/pustules immediately following the N2 mine explosion. At present it is not known what other detail changes have been made to the Angel for the 1.11 release.

In the PC game, Sachiel is part of the mass Angel attack.

Sachiel is one of the playable characters in the "brawling" game Neon Genesis Evangelion: Battle Orchestra.