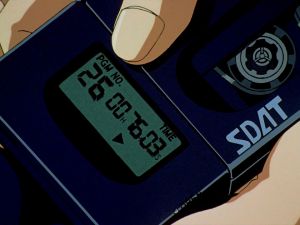 SDAT (or S-DAT) is a format of Digital Audio Tape developed by Sony. The "S" prefix denotes that it is the format which uses a stationary magnetic head. Shinji Ikari is seen throughout the Neon Genesis Evangelion TV Series and Movies listening to an SDAT player, noteably switching between tracks 25 and 26. Some fans have postulated that there is a possible connection between tracks 25 and 26 and the last 2 episodes of the TV Series.

The SDAT in Rebuild

In Evangelion 2.0: You Can (Not) Advance, it is revealed that the SDAT player functions as a token of attachment to his father, Gendo Ikari and it's used to shut himself off the outside world. Shinji mentions that his SDAT player was belonged to Gendo, Shinji took it after it was left in his teacher's home. In on scene, the SDAT players skips from track 25 to 27 shortly before the plot diverges from that of the original series, lending credence to the theory that the track numbers are related to the episodes. In later part of the film, Shinji throws the SDAT player in a rubbish bin as he loses faith in his father. Rei subsequently picks it up and keeps it.

The SDAT player in Evangelion 2.0 and 3.0 has "Super･Digital Audio Tape" under SDAT.

In Evangelion 3.0: You Can (Not) Redo, track 28 is played. At the last part of the film, it's unknown did Rei pick up the SDAT player or not.