Ritsuko Akagi[2] is Nerv's chief scientist, and is in command of the Technical branch of Nerv HQ, which is responsible for the research and development of the Evangelions, as well as their maintenance and repair. She is the daughter of famous Gehirn scientist Naoko Akagi, who headed the Evangelion project before her. Ritsuko met Misato Katsuragi in college at Tokyo-2, as well as Misato's boyfriend Ryoji Kaji. After graduating college, Ritsuko joined Gehirn, and worked directly under her mother Naoko at the then-unfinished Tokyo-3. In many ways, Ritsuko is living in her mother's shadow.

Throughout the bulk of the series, Ritsuko at first appears to have a good friendship with Misato, occasionally teasing her about her smaller shortcomings. But Ritsuko also avoids speaking about the personal and emotional aspects of her own life, and under stress, the two women grow farther apart instead of confiding in each other, due to some ethical differences and Ritsuko knowing more about what is going on but refusing to share this information with Misato. 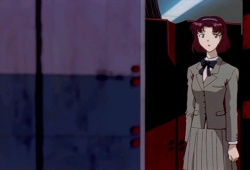 Ritsuko was secretly involved in a sexual relationship with Gendo Ikari, who had been with her mother prior. In addition to "sharing" the same man, the two Akagis both manifested destructive behavior towards the figure of Rei Ayanami, despite a period of initial emotional control. In Ritsuko's case, this was clearly because of jealousy towards Rei, and it might have also been that way with Naoko. Ritsuko’s particular attack on Rei might have been triggered when she was sent in place of Rei to Seele and put nude before them. In retaliation Ritsuko destroyed the Dummy System and with it the mindless Rei clones, insisting that what she’d really killed was Rei, her "rival."

The parallels between Gendo's relationships with both Akagi women are ironic, given that Ritsuko tries to distance herself from her mother, most obviously by dying her hair blonde to be distinct from Naoko, as her natural hair color that is very similar.

Besides this, Naoko and Ritsuko appeared to have a slightly strained relationship[3]. Naoko apparently raised Ritsuko without what she felt was adequate supervision, which could be from where Ritsuko receives her tendency to shoulder all burdens and responsibilities in a tense situation, as she has been figuratively on her own for a long time. 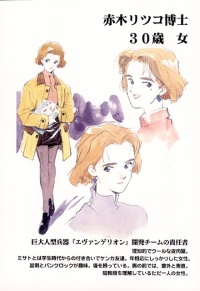 Ritsuko's design in the Proposal

Ritsuko's social difficulties, especially with romantic relationships, might also relate to this, as Naoko also blamed Ritusko’s difficulties with understanding the relationships between men and women (Ritsuko was appalled at Misato taking a week away from school with Kaji, and often comments on the perceived illogic between the interactions of men and women) on her being raised without men around. The identity of Ritsuko’s father remains unknown, as the only other family member mentioned is her grandmother (presumably from the maternal side).

Though she normally appears calm and balanced, Ritsuko’s normal demeanor degenerated into coldness by the end of the series, a breakdown which the destruction of the Dummy System was only one part of. She soon became suicidal, intending to take Gendo, Rei, and Nerv Headquarters with her in Episode 25'. But of the Magi, which Ritsuko had reprogrammed for self-destruction, Casper rejected the command, and the shocked Ritsuko saw it as Naoko choosing Gendo over her. Before he shot Ritsuko, Gendo said something that was never heard. With her last words, Ritsuko called him a liar, her eyes filling with tears.

Though it is not seen onscreen or even named, Ritsuko has a cat which her grandmother took care of until it died. Ritsuko apparently visited her pet very seldom, and expressed a kind of numb surprise at its death. This is also suggested by Ritsuko’s grandmother telling Ritsuko to call her first next time. In addition to owning a pet cat, Ritsuko has several cat-related knickknacks decorating her desk: a pair of cat figures (one black and one white), and a coffee mug (the same cat design on the latter can be seen in Episode 26). Kaji also once gave her a small trinket that he called "a cat souvenir" (Episode 15). This affinity for cats might have a symbolic relationship to Ritsuko’s own attempted independence, as such an urge relates to the solitary traits of cats.

Though she is rarely shown smoking onscreen, Ritsuko apparently does it quite heavily, as she is often seen with ashtrays full of cigarette butts marked by her lipstick, possibly indicating anxiety.

Ritsuko has more or less the same role and personality as in the TV series in Evangelion 1.0 and Evangelion 2.0, aside from being in charge of Rei's health as well. She is rather less prominent as a character in the movies than she is in the TV series and does not appear to share the same relationship with Gendo. She seems a shade more distant with Misato, and although they disagree, their friendship does not appear strained. Unlike the TV series, where Ritsuko knew far more about the Evangelions than Misato, both of them seem privy to the same level of information. Ritsuko is seen smoking onscreen more than once, unlike the TV series, where the only scene of her seen smoking onscreen is in a flashback as a college student. In 2.0, she has a pair of black cat trinkets, both apparently representing female cats.

Ritsuko returns in Evangelion 3.0 as the first officer of the AAA Wunder. She does not look like she has visibly aged during the 14-year timeskip. Apart from having cut her hair very short and wearing a black shirt, she appears to be largely unchanged. Although some fans have interpreted Ritsuko's haircut as evidence of the end of a relationship with Gendo (as with her TV counterpart), no concrete evidence of this exists.