The following is a timeline for the events in the continuity of Neon Genesis Evangelion and The End of Evangelion.

The events from the Evangelion New Theatrical Version movies mostly have dates omitted from them, like Second Impact. However, the December 2006 issue of NewType Magazine has producer Toshimichi Otsuki mentioning "the new story takes place in the same period as the 1995 TV series"[1], which implies that the major events from the new movies occur relatively close to the time they occur in the TV Series. Of some of the details when a date is shown, we see that they're relatively close.

Near the beginning of Evangelion 2.0, when Gendo and Shinji are visiting Yui's grave, we see that the grave stone is marked "2004", indicating that her "death" was in 2004 which is the same as in the TV Series. 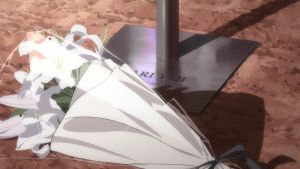 During one of the classroom scenes early in Evangelion 1.0, shortly after Shinji becomes the pilot of Evangelion Unit-01, there's a notice pinned up on the classroom's bulletin board which has the date 11/13 and in parentheses it says "Monday". The years 2006, 2017, and 2023 all have November 13th occur on a Monday, however, since Shinji is in middle school, it can't be 2023 because Yui's been gone since 2004 which would make Shinji much older, likewise, it can't be 2006 because at the grave site, Gendo says "The last time we came here was three years ago", which would make it at least 2007 (although it's possible that by this time in the movie, it's 2007). The beginning of the school year probably occurred in the year 2017. The same notice is also on the bulletin board throughout 2.0. 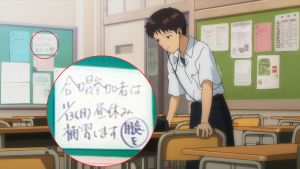 A close up of the date on the bulletin board

During one of the scenes in Misato's apartment in Evangelion 2.0, shortly after Asuka moves in, there's a calendar visible that says "February" (28 days) with the first of the month occurring on a Thursday. The years 2007, 2018, and 2024 all have February first falling on a Thursday. 2007 would have the same logistical issues with when Shinji becomes the pilot for Evangelion Unit-01 and 2024 is a leap year so the number of days won't fit in the calendar. This leaves 2018 as the best fitting year for Asuka's arrival. 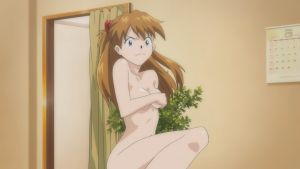 Asuka in Misato's apartment with a calendar on the wall

It's possible that the timeline that the first two movies cover are either from 2006-2007 or 2017-2018. If we are to assume the validity of Otsuki's statement, 2017-2018 makes more sense. If Second Impact occurred at relatively the same time as the TV series (2000-ish), then it would mean the children were born before Second Impact, but the conversation between Shinji and Kaji during the field trip in Evangelion 2.0 seem to imply that Shinji is completely unfamiliar with what life was like prior to Second Impact, making it unlikely that he was born before.