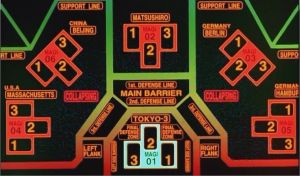 The S.C. Magi System (マギ) are a trio of supercomputers designed by Dr. Naoko Akagi during her research into bio-computers while at Gehirn.[1] The Magi's 7th generation organic computers were implanted with three differing aspects of Dr. Naoko Akagi's personality using the Personality Transplant OS (Operating System). The same system is used to operate the Evangelions.[2] The Magi are used during episode #13 to connect the simulation bodies to the Evas in their cages and, presumably, the synch-tests when the pilots are not present in the actual Evas are also conducted through the Magi.

The three Magi run Nerv Headquarters and the municipal government of Japan by majority decision.

The other branches of Nerv also possess trios of Magi supercomputers:

Nerv's 2nd Branch, located in the Nevada (USA) desert, may also have possessed a set of Magi supercomputers prior to the base's disappearance into a Sea of Dirac.

The Magi are the target of the Angel Ireul's attack during Episode 13.

In The End of Evangelion, Seele uses the five other sets of Magi listed above to attack Nerv Headquater's Magi system, in the hopes of taking over Nerv without a fight and thus ensuring they could capture the original Magi system without it being damaged. However, Ritsuko Akagi was able to erect a type-666 firewall in time to stop them, forcing Seele to order the JSSDF to mount a physical attack on Nerv. While Ritsuko set up the firewall, a special program was also installed which she later used in an attempt to self-destruct Nerv, along with Gendo, her true target. Casper, Naoko Akagi as a woman, rejected Ritsuko's order and so her decision to self-destruct Nerv was overruled by this.

The three Magi in the 1st Branch of Nerv are named after the three Wise Men of the East who visited the infant Jesus according to Gospel, as Fuyutsuki points out during Episode 21.