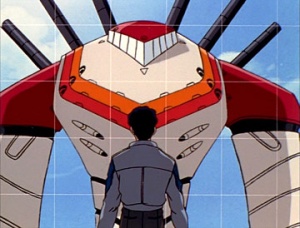 Jet Alone is a powerful giant robot developed by a rival defense contractor to Nerv, designed to supplant the Evangelions. Unlike the Evangelions, which have a limited internal power supply and must rely on external power cables for extended usage, Jet Alone has an on-board nuclear reactor and can essentially function indefinitely in combat.

Jet Alone requires no on-board pilot, and is apparently remote-controlled.

Jet Alone appears in Episode 07, when the prototype is unveiled in a public demonstration at Old Tokyo. However, the project was secretly sabotaged by Gendo Ikari and Ritsuko Akagi, resulting in Jet Alone losing control and turning into a walking nuclear bomb. Misato Katsuragi struggled desperately to manually insert Jet Alone's emergency shut down code before its reactor went meltdown, however, it was never intended to actually explode. Gendo simply intended for the rival defense contractor to lose face, so the Jet Alone project would not be continued. 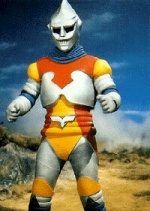 Jet Alone was named after Jet Jaguar, Godzilla's robot sidekick from Godzilla vs. Megalon. In an early draft of the Megalon script, Jet Jaguar was named Red Alone; the Eva screenwriters took the first half of the final name and the second half of the preliminary name to get Jet Alone.