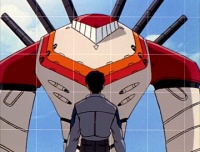 Jet Alone is a bipedal robot developed by Japan Heavy Chemical Industries, designed to supplant the Evangelions. Unlike the Evangelions, which have a limited internal power supply and must rely on external power cables for extended operation, Jet Alone has an internal nuclear reactor (likely a pressurised water reactor) and can function for at least 150 consecutive days. Jet Alone also requires no pilot, and is controlled by an onboard computer. Radio commands can be issued from a ground station. Being a robot and not a living being, Jet Alone cannot generate an A.T. Field. Shiro Tokita pushes aside the issue, describing the creation of an (artificial) A.T. Field as "only a matter of time."

Exactly why Nerv saw Jet Alone as a threat is not clear, especially since the robot could at the very least provide a distraction or shield for the Evangelions. It is possible that Gendo feared that vital funding would be diverted from Nerv to the Jet Alone program if the demonstration proved a success, or that it could be used to embarrass/discredit Nerv with the politicians and public (Tokita's mockery of Ritsuko and the Evangelions suggests this). It is also likely that Jet Alone would, at some point, be used against Nerv. Pragmatic considerations may have played a role, since Nerv knew that the nuclear-powered robot was vulnerable against Angels due to its lack of an A.T. Field, but would logically be deployed in or around Tokyo-3. They may simply have judged the risk of radioactive contamination to Tokyo-3 from a damaged or destroyed Jet Alone too high to allow it to be operational.