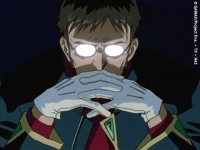 Hanji from Attack on Titan

Sohma Yuki from Fruits Basket (on the right) displaying a variant of the pose, in which the fingers are not interlocked. (Gendo himself displayed this variant many times.)

Nishikinomiya Matsukage from Shimoneta: A Boring World without the Concept of Dirty Jokes displaying a lovely Gendo, in what is almost certainly an intentional NGE reference. (Especially when you consider that he raised a Rei expy to protect his daughter, and has been manipulating events from behind the scenes for the whole duration of the series. He's smiling in another cut in the same episode because his plans have finally come to a head.)

Nishikata from Karakai Jōzu no Takagi-san (Skilled Teaser Takagi-san), an anime that began airing in January 2018.

Characters from Wotakoi (Love is Hard for Otaku). They never say Gendo, but the scene plays the beginning drum beats of "Decisive Battle" while showing this, and they call out the guy on the left as being the "Fuyutsuki."

Character from Robotics;Notes displaying the Gendo Pose, with a Fuyutsuki stand-in.

Dr. FranXX, from Darling in the FranXX, displaying a strong Gendo Pose (in addition to the similarities of their roles in the plot), with a Fuyutsuki stand-in next to him.

Sora, from No Game No Life, with a lovely Gendo. His hair is actually somewhat darker in this shot than appears to be the norm, and I don't believe he usually wears glasses either. Seems to be a completely intentional reference. 10/10.

A member of the council that manages human affairs in the short Bureau of Proto-Society, from Anno's Animator Expo. Considering Gainax staff's penchant for self-reference, and the character's role as essentially a member of a SEELE-equivalent, if this isn't an intentional reference... well, I'd be very surprised. 11/10.

|image15 = [[Image:Szs_ep2_coffee_cans.jpg|thumb|200px|Screenshot from Sayonara Zetsubou Sensei, depicting UCC coffee cans with a silhouetted Gendo Pose on them (as well as a clear reference in the dialogue shown here). |caption = }} 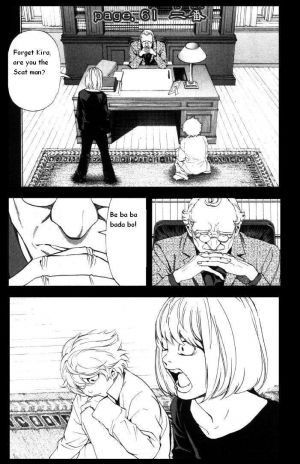 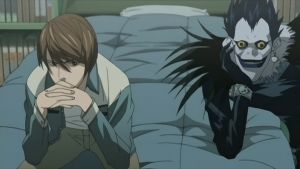 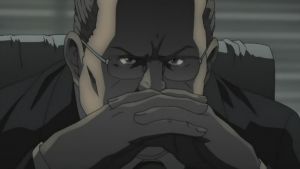 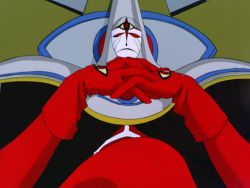