The Evangelion 1.0: You Are (Not) Alone Complete Records Collection (ヱヴァンゲリヲン新劇場版：序 全記録全集)(ISBN 978-4-903713-17-5) (ISBN 978-4-905033-01-1)is a massive collection of material related to the first Rebuild movie. It consists of three books packed together in a cardboard box. The first book, hardcover and also in a hard slip cover, contains everything from interviews with staff to concept art and a breakdown of the movie cut by cut. The other two books are the storyboard for the movie split into A and B parts. It was re-released in 2012 with khara/Groundworks as publisher.

A breakdown of the entire movie cut by cut, with dialogue under some shots. From the khara logo all the way to the end trailer and credits. Music cue sheet and additional scenario also in this section. 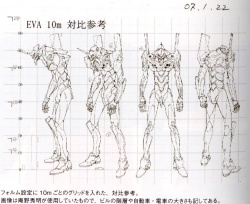 One of the most interesting parts in this section is that it shows Evangelion Unit 01 on a 10m grid along with a train car and a regular car. This finally gives Evas an official height of 80m from the ground to the top of the pylons, although this is assumed to apply to Rebuild only.

Concept paintings of the various scenes from the movie.

Contains various posters as well as the two trailers broken down cut by cut.

Contains pic of all the other promotional stuff: movie tickets and pamphlets, OST and DVD covers, Doritos packs, UCC coffee cans and other stuff.

A foldout poster of Rei drawn up by Sadamoto