Asuka's synch rate is on a downward spiral after her defeat at the hands of the Fourteenth Angel, Zeruel, and her frustration with Rei, Shinji, Misato and (unknown to her, dead) Kaji is on the rise. Angrier and more disturbed than ever, she is forced to relive her dark, traumatic past during the encounter with the Fifteenth Angel, Arael.

The Episode begins with Asuka and Kaji aboard the Aircraft Carrier on their way to Japan. Asuka talks to Kaji about Misato and tells him that he is the only person she loves, in what amounts to an excessively strong schoolgirl crush. Kaji rebuffs her, saying, "You're only a child."

Other dark images of Asuka's past abound, including images of her mother lying in hospital and holding a doll. The real Asuka watches as her previously neglectful mother refuses to recognize her and treats the doll as her daughter, while her father (Langley), speaks to and then makes love with the lady doctor[1] in the next room. Asuka refuses to cry at her mother's funeral after she commits suicide.

Back in the present, Asuka's sync rate is on a downward trajectory. Ritsuko notices that it could be a major problem, with the Evas still in repair after Zeruel's attack. She orders Maya to see to it that Eva-00 get the most attention for now.

Meanwhile, Misato has a covert meeting with Hyuga, who has learned from his sources in Shanghai that the other branches of Nerv have started production work on Evas all the way up to number 13. Misato notes that it is strange that they are starting mass production at this stage. Hyuga guesses that the reason is either to ensure they have enough reserve parts or it is a way to defend against multiple Angels attacking at once, but Misato points out that is still rather suspicious that the Committee is trying to keep the production a secret, and believes that they might have some other objective in mind. 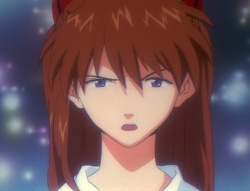 Asuka glares at Shinji at the train station.

Late in the afternoon, Asuka is on her way home from the sync test and waits for the train at a station. She tries calling Kaji on her phone, but an automated message tells her that the number is no longer in use. Frustrated, Asuka takes a look around at the station and spots Rei and Shinji on another platform, with Shinji talking casually to Rei. Asuka is annoyed at this, feeling that she has lost to Rei.

Asuka ignores Shinji and there is visible tension between her and Misato at dinner. Soon afterwards, her stepmother (The doctor) calls up and both of them speak in German for a while before she hangs up, with a dark expression on her face. Shinji fails to notice this, and tries asking her about the conversation, noting that it must nice to have some family to talk to. Asuka, in a rare unguarded moment, opens up to Shinji and tells him the truth about her stepmother, namely that she doesn't hate her, but only really talks to her to keep up appearances, before getting angry and wondering why she is telling all this.

Asuka's mood worsens as the night goes on, culminating in her screaming out her hatred of Shinji, Misato, Rei and herself in the bath. Misato notices this with some concern.

The next day, Asuka undergoes a new test, with her score even worse than the day before. Misato tells Risuko that Asuka is on her period, and that her bad results have something to do with that, but Ritsuko says that superficial physical conditions shouldn't normally affect the score, and guesses that the problem is of a psychological nature. Her and Ritsuko talk afterwards, with Misato noticing that things between Asuka and Shinji are close to the breaking point, that she is considering to have them live separately.

Elsewhere, an exhausted Asuka rinsing herself off in a bathroom, asking why she has to go through menstruating when she doesn't want to be a mother. On her way back, she runs into Rei in the elevator, and after a long silence, Rei speaks, telling Asuka to treat the Eva like a person. Enraged at Rei trying to help her out, Asuka slaps Rei and storms out of the elevator. She talks to Eva-02 for a while, telling it that it's her puppet, before deciding, "This is stupid."

A view of the Spear and Arael from Earth's orbit

Right then, the Angel Arael[2] arrives, holding its position in Low Earth Orbit very far from Tokyo-3. Rei is sent to shoot the Angel, with Asuka as a backup, but Asuka refuses to be her backup and takes point position instead. Ritsuko mentions to Maya that they need to think of a replacement pilot for Eva-02. Arael remains just out of range of Asuka's Positron Rifle, and generates a beam of visible light similar to an A.T. Field that penetrates the Eva's mind.

The Eva fires but Arael is too far for the shots to contact. Eva-02 convulses and shoots causing damage all over Tokyo-3. Asuka screams in pain as the Angel tries to enter her mind, and soon succeeds[3], revealing even more of her inner trauma, and how she constantly desires for attention by being the best in everything. As Eva-02 shuts down and the pilot continues to wither mentally, Rei is ordered to shoot the Angel with a sniper version of the Positron Rifle (Similar in appearance to the one used against Ramiel), but the beam is too weak to penetrate the Angel's A.T. Field at that range.

Gendo orders Rei to retrieve the Spear of Longinus from Terminal Dogma (where it lies driven into the crucified Lilith), which she uses to deadly effect on the Angel[4]. The Spear, however, is lost. Shinji tries to console Asuka, who is even more upset after the mental attack and hates the idea that Rei saved her.

For a detailed comparison of the redrawn scenes, see Guides:Episode_22_OA_vs._DC