Difference between revisions of "Episode 21" - EvaWiki - An Evangelion Wiki - EvaGeeks.org

Difference between revisions of "Episode 21"

Kozo Fuyutsuki is kidnapped and interrogated by Seele, who are horrified over the results of the last encounter with an Angel. He recounts his past, providing flashbacks into the creation of Nerv. The pasts of Misato Katsuragi, Ritsuko Akagi, Rei Ayanami and Yui Ikari are also revealed. Ryoji Kaji, meanwhile, decides to find out the truth, no matter the cost.

A recording showing the circumstances leading up to Second Impact begins the episode.

Ryoji Kaji makes a phone call to Misato, and gets her answering machine. He comments that this is his last mission, and that his Nerv I.D. card looks like blood. Elsewhere, Misato has just heard that Fuyutsuki has been abducted, and Kaji is a suspect. Because of her relationship with Kaji, she is also under suspicion and is taken into custody.

Kozo Fuyutsuki, meanwhile, faces the Seele monoliths rather than the committee. They have questions to ask him, and call him Fuyutsuki-sensei, a title he hasn’t heard in a long time....

A flashback to 1999, in Kyoto. Working at the university, Fuyutsuki is told about the work of a promising new bioengineering student, Yui Ikari, and the two have a meeting, revealing that Yui is also considering a domestic life over her research. Fuyutsuki looks both startled by and interested in this information.

Shortly afterwards, Fuyutsuki meets Gendo Rokubungi. The younger man had asked to be released into Fuyutsuki’s custody after being involved in a brawl, even though Fuyutsuki had never heard of him. Fuyutsuki dislikes Gendo almost immediately, so, he is surprised to hear that he and Yui are seeing each other[1]. Yui says that Gendo is actually very nice, but no one knows it. Fuyutsuki notes that at the time, it was thought that Gendo was with Yui because of her connections to Seele.

Second Impact occurs; Fuyutsuki does not go into detail, except to say that the first year was "pure hell". In 2002, he is working as an unlicensed doctor in the ruins of Toyohashi City, Aichi Prefecture. Japan is now a country of perpetual summer. Fuyutsuki finds that he has been invited to a UN investigation of the Second Impact. 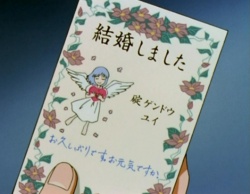 Gendo is there in Antarctica, much to Fuyutsuki’s shock, having apparently left a day before Second Impact. His surname is now Ikari[2], and he is married to Yui with a child. He hands Fuyutsuki a card from Yui including a drawing of a blue-haired angel[3]

In the present day, Misato is being kept in dark isolation. She hates the bad memories it brings. The past shows Fuyutsuki watching the teenage Misato in the South Pole Investigation Ship Isolation Facility 2, and he is told she hasn’t spoken in two years.

Second Impact is officially classified as a meteor impact. But Fuyutsuki knows that Seele and Keel Lorenz are involved.

In 2003, Yui and Fuyutsuki meet in Hakone, but Fuyutsuki has business with Gendo. He knows that Gendo knows more than he’s letting on, and has an unusually large amount of private money. Fuyutsuki threatens to go public with the real truth about Seele, Second Impact, ant the Dead Sea Scrolls, but Gendo invites him to see something.

The two men go underground, into the GeoFront, and meet Naoko Akagi, see the Magi and a prototype Evangelion, which Fuyutsuki momentarily mistakes for Adam. Gendo invites Fuyutsuki to work with him to create a new future for mankind[4].

In 2005, the first meeting between Misato Katsuragi and Ritsuko Akagi is shown, narrated by Ritsuko. Misato is now her bubbly self. Soon Misato and Kaji get together, and Misato spends a week away from classes with him.

In 2003, Yui (with the young Shinji) and Fuyutsuki are discussing matters at the Ashinoko Lakefront, Hakone. Fuyutsuki supports her ideas, not Seele’s. He knows that he can be easily erased, but tells Yui there’s no reason for her to become a test subject. She merely replies that she will "go with the flow of things", and is at Seele for Shinji’s sake.

In 2004, at Hakone Underground Laboratory 2, the Contact Experiment is taking place. Yui has brought her young son to watch the proceedings. But Yui is wiped out in a "freak accident". According to Naoko Akagi, Gendo changed completely after that day, but she begins a relationship with him regardless. Gendo tells Fuyutsuki he intends to propose the Human Instrumentality Project.[5]

Ritsuko joins Gehirn and discovers her mother's affair with Gendo. A young Rei Ayanami is introduced soon after that, being shown headquarters by Gendo Ikari. Naoko looks at her and is reminded of Yui. She searches the database and finds that all of Rei’s records have been erased. The Magi are completed after this, and Misato is in Branch 3 of Gehirn in Germany. She and Kaji have already broken up.

Rei is lost and comes to see Naoko. When Naoko offers to let Rei leave with her, Rei calls her an "old hag"[6], and adds that it is Gendo who calls Naoko that, and also pushy, not needed. Enraged, Naoko strangles the girl, calling her just as replaceable. Naoko is horrified at her deed, and commits suicide by jumping from a high rail above the Magi. The day after this, Gehirn is disbanded, and Nerv is formed.[7]

Kaji leaves the phone booth, (the episode must have actually begun at this point) and frees Fuyutsuki, who comments that this action will result in his death. Kaji replies that he was thinking of himself because Seele was about to discover that he was the one who brought Adam to Gendo and that he just wants to get closer to the truth. Misato is released from custody. Kaji meets an unseen person, and is shot. When Misato gets home, she finds an answering machine message from Kaji, and breaks down in tears as it plays. Shinji hears her crying and gets up, but can’t go into the kitchen. He returns to bed and puts a pillow over his ears, thinking that he is just a child, and there is nothing he can do.