This is a translation of the letters, emails, and graffiti that quickly flashed (about one per frame) at the end of the live action sequence in the second half of End of Evangelion. These were commonly referred to as Death Threats (or hate mail), a very common myth, but the vast majority of them are, in fact, not death threats.[1] Most of the letters and emails showed genuine appreciation and, in some cases, praise and encouragement/anticipation towards the End of Evangelion, as they were written in reaction Death and Rebirth, not the ending of the series, which also featured part of what would later become Episode 25'.

It was also revealed in a Tokyo International Film Festival interview that Anno revealed that there were legal reasons that prevented them from actually using fan mail, so the mail was actually written by the staff. The "hate mail" letters were written by an old friend of Anno's. This interview can also be found on the Shiki-Jitsu blu-ray extras.

Note: In certain places, <cut> is used because the on-screen text was cut-off and could not be translated. 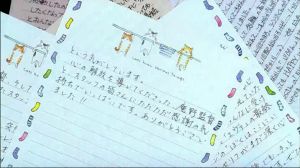 After seeing "Evangelion" I felt very impressed, so I somehow sent this letter. I'm a middle school student like Shinji.
First of all, I saw Eva and now it seems like I truly recognize myself, and this feeling is because of Eva. I want to say thank you for this.
Why do I say this? To explain it would take a while, but Shinji and I are alike; depressed and helpless and introverted.
I remember watching Eva and seeing Shinji being worried and troubled and I felt the same in my heart. In "EVA",
there was an analysis that said how Shinji couldn't run away from the pain or the unpleasant feelings that were attached,
and I have felt like this way too. At the beginning, I really like it <cut> that's why this anime gives me that light feeling <cut>
but gradually Ms. Ogata <cut>
In the last scene on TV, Shinji accepts everyone and they all congratulate him; that was a very nice end and I felt very happy.
Another friend <cut> that last scene <cut>
This year I graduate from middle school, and now my focus is on being a high school student, and so that's why I'll now make my best effort.
I'm going to see the EVA movie. I'm worried about what will happen to Shinji in the movie (but I like the last scene on the TV series a lot).
And thanks to EVA, I've started like myself and that has made me very happy. <cut> Mr. Anno, please keep working on EVA a lot more.
<cut> and thank you so much for everything!!

(Is the same text as in Letter 1 but with different calligraphy.)

(Is the same text as in Letter 1 right side but with different calligraphy.)

<cut> I also felt inside myself the same excitement that Shinji felt.
The last scenes made me appreciate my own existence even more.
The feelings of the very last scene parallel the feelings of the main character, Shinji.
<cut> everybody was finally witnessing <cut> EVA's last moments.

<cut> that's how I feel.
Thanks to Mr. Anno and all the staff for helping to liberate our hearts and souls, and for all of these feelings. Thank you very much. 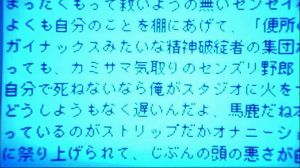 <cut> Studying the grafitti, how is it possible that it says that?
<cut> it seems that some religious group
<cut> I'm not aware of my own evil <cut>

Note: This is possibly Anno or one of the staff commenting on the graffiti on the walls outside of Gainax's studio. 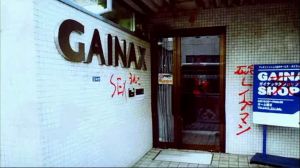 The last frame of graffiti, following several frames of close-ups

Note: The previous letters were close-ups of the graffiti shown here 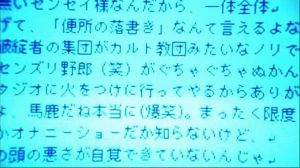 ... as a totally hopeless yet respected artist, so "what the hell".
Closing your eyes to your own faults, how can you just dismiss it as 'bathroom graffitti'?
A mentally bankrupt group like GAiNAX is like a religious cult that...
Even so, a jerk-off posing as a god (laugh) who can't get it on...
If you won't die on your own, I'll do you a favor and set fire to your studio.
Late beyond belief and totally brainless. (racuous laughter) Talk about not knowing your own limits...
I don't know if you're putting on some kind of striptease or jerk-off show, but...
...up on your pedestal, you can't possibly be aware of just how stupid you are. 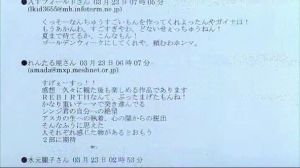 Amazing!!!
What a great production of REBIRTH!! Even many days after I saw the movie, I still canít stop thinking about it, this really astounded me!!!
This movie really develops a very deep and serious theme.
Shinji's falls into despair and Asuka's arrogance appears to be some sort of escape from the darkness in her heart.
These people have difficulties in dealing with their feelings; and so in their own ways -- Shinji by totally collapsing and falling apart,
and Asuka by letting her arrogance cover up her inner weakness -- they each work towards the same goal: to come to terms with themselves.

Translator's Note: the last part, after Asuka's sentences, is the general idea, is like the guy is seeing in Shinji and Asuka, two examples of escaping from reality with two different ways of do it. One falling apart and the other avoiding her own darkness. But at the end both of them have the same expectations. Just in case it became a little confuse ;D, btw isn't a literal translation, I'm trying to take the main idea because that last sentence was difficult to explain in English in a literal way. 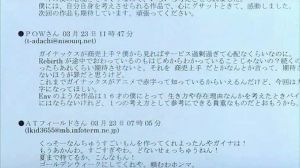 
Is Gainax able to maintain their business?
REBIRTH ends in the middle, and since the beginning I couldnít even understand it. Continuing <cut> don't make us have those dark expectations (*).
That's what I'd consider being successful in their work. But I think that not creating expectations is like a crime.
Anyway, since this was released, Gainax has become well-known in the anime world. This time <cut> I'd like it. (*)
I'm 16 years old, young, and talented, and this movie made me think about life and the meaning of our existence, and when I thought about this <cut>

Translator's Note: The (*) means that some part of text is missing, due to the fact that in the pic there was a cut part. Due to this I can't fully translate the last part since I'm missing the whole meaning. 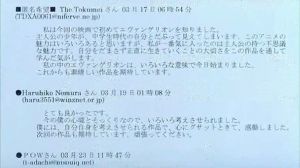 
When I saw this movie, I knew Evangelion for the first time.
When I looked at the main characters, I could see my high school self in them.
I think that this anime has a lot of fascinating things, but the one that affects me the most is the main character's mysterious charm.
I feel that the main thing that this movie teaches us is about the importance of being honest with our own lives.
Today I started to find a lot of meaning inside Evangelion.
After seeing this, I have a lot of expectations for the other movie.


It was too long.
My true mental state has various thoughts all mixed together, and this doesn't allow me to think properly.
This movie made me think about myself and really feel the emotions that are deep in my heart.
I'm waiting for the next movie. Good luck and please make it your best!!! 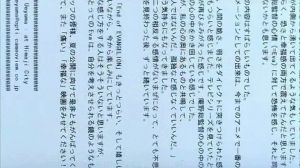 The first frame of a quick pan 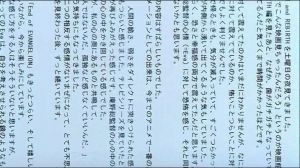 The last frame of a quick pan 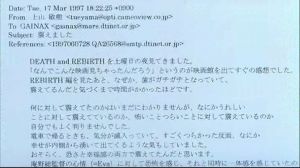 The first frame of a quick pan downwards

Note: The next 8 frames consist of the same letter. In the first few, the letter is on its side, and the last ones the letter is right side up, allowing you to see more of the text.


I went to see DEATH and REBIRTH Saturday night.
"Why did I even see this movie?", that was the impression I had when I went out of the theater.
Why, after I saw REBIRTH, were my teeth were chattering, and why was I shivering for nearly an hour?
I didn't understand why I was shivering, was it for something scarring or for something painful?
When I was on the train, returning home, I had that terrible painful feeling, but also at the same time, happiness started to grow inside of me.
Perhaps the shivering was a way to express all those confusing feelings of fear and euphoria.
Regarding to Hideaki Anno's mentality (meaning, Evangelion) I feel terrified, but at the same time I felt like I could identify with it too.
About the movie's contents - it is just amazing.
The animation's quality, isn't it the best animation now?
However, the way in which is shown in the director's cut the human's fragility was very painful.
I could feel the pain of the TV series again. I could feel inside my heart the feelings inside Hideaki Annoís heart.
So in my heart, I sympathized with "I'm not alone. To feel loneliness is better." I still feel a strange sensation even after watching the movie, because of these two opposite feelings mixing in myself.
I'm waiting for the summer to see "End of Evangelion", and I know that that will be even more painful, but I will feel happy and enjoy it.
I don't think that there are many people who feel this way, but in my case, EVA made me think about myself and was like a mirror of myself.
People of the staff, do your best with the summer movie, and good luck!!
And until then, show us a "painful" and "happy" movie!!!


Translator's Note: Since is a whole letter split in 3 parts, I translated like a whole thing which was more easy, since some parts were twice between the parts. 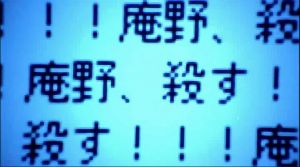 A close-up of a computer screen

Translator's Note: I felt exactly the same way as #24 after encoding this eva-madness for over a year now.

Letters 9, 12, and the first part of 13 were translated by Bochan Bird.