Theory and Analysis:Shinji and the Lake - EvaWiki - An Evangelion Wiki - EvaGeeks.org

Theory and Analysis:Shinji and the Lake

An expanded view of the shot commonly used as evidence (available from Collector's Disc 6). Note that Shinji's clothes are *not* soaked as they would be if he even entered the lake in the first place.

Shinji standing near a cliff in Episode 4. 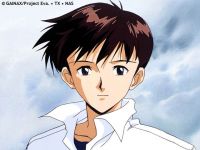 Shinji's face in this same scene is shown in a very similar manner.

After killing Kaworu in Episode 24, Shinji feels despondent and overcome with guilt, as he has killed someone he saw as a human being and treated him well when Shinji firmly believed nobody cared about him - a belief that Shinji has had reinforced as he believes he has been used by Kaworu. He is standing near the lake created by Rei self-destructing her Eva in Episode 23, flooding the ruins of Tokyo-3 with water from the nearby Lake Ashinoko. It seems Shinji is suicidal and has just emerged from a botched or aborted suicide attempt. While Shinji is certainly in a bad state of mind, he is not suicidal. This has been a popular theory for some time, but storyboards make it clear that Shinji did not try to drown himself, but instead merely stood for hours looking at lake, and his wet hair, the primary evidence for this theory, is merely that way because Shinji has been sweating from the scorching heat of the sun, which is also present in the scene.[1]

This might seem like a less interesting plot point than an attempted suicide, but in fact, it ties in nicely to the movie and the series as a whole. His own lack of self worth indicates he feels he is unworthy and might perhaps be seeking some punishment for yet another personal failure. This motivates him to seek out Asuka and even ask her to insult him, not only to confirm his feelings of worthlessness but also because he remains desperate for any sort of attention, from anyone. In fact, this scene is visually paralleled with Shinji running away earlier in the series in Episode 4, and narratively and thematically paralleled with Asuka running away in Episode 23 and 24. Like Asuka, Shinji has lost the will to live, but also lacks the will to kill himself[2], and instead chooses to wait for death, both here and later, hiding himself in a dark corner, even as NERV is being invaded, Misato looks for him and even Asuka herself asks for him help.

Please refer to this thread: http://forum.evageeks.org/thread/8225/Was-emo-Shinji-becoming-AN-HERO-in-25/

Theory and Analysis:List of Common Misconceptions

Theory and Analysis:Asuka and the Bathtub