The Tree of Life (עץ חיים) is a term from the Hebrew's system of exegesis, named Qabalah (קבלה), to describe a diagram composed of 10 Numbers and 22 Letters. The ten Numbers are the ten sayings of God in the first chapter of Genesis (בראשית) in which He wrought the universe, with the 22 letters of the Hebrew alefbet interpolated between these Numbers. 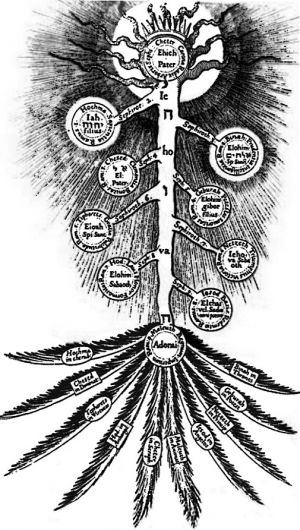 Robert Fludd M.D. born in 1574 in Kent, England, was a Christian mystic and scientist. He penned the diagram to the right.

The ten Hebrew names of God allotted onto each of the Numbers by Fludd are fairly standard. The interesting parts of this diagram are Fludd's attributions of the Christian Trinity onto the Tree of Numbers.

† Here, Crown is given a crown of nine points, showing its presidency over the nine lower Numbers. Each point may be attributed to each letter of אין סוף אור, see sub-heading 2.3

‡ Fludd has written יהוה when Iah is spelt יה

The Name of God, יהוה, is seen associated with particular Numbers along the trunk of the Tree.

י is touching Crown while associated with Wisdom as the Father, the tip of.

ה with Intelligence as the Mother.

ו with the Lesser Countenance of Mercy, Fear, Glory, Victory, Honour, and Foundation, but particularly with Glory as the Son.

ה with Kingdom as the Bride.

The ten palm leafs that share Kingdom as their base have written upon them the ten angelic orders that are allotted on the Tree in יצירה. Fludd ascribes the nine orders of Christian angels to each of the Numbers from Crown to Foundation, Kingdom is ascribed Soul. 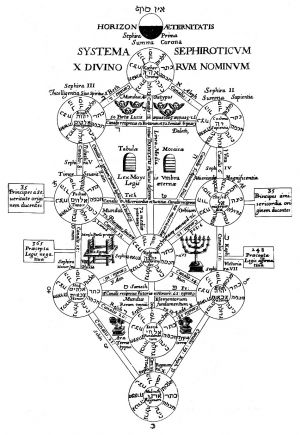 System of Numbers of 10 Divine Names.

Athanasius Kircher born in 1602 in Thuringia, Germany, was a Christian mystic and scientist. He originally penned the diagram to the right.

You will notice that each of the Numbers has written about it the names of the Numbers again, for each Number is said to have 10 Lesser Numbers within it. Essentially there is a further Tree within each Number. When this is repeated through the 4 Worlds we count 400 Numbers in total, which shares the same numeric value of the final letter of the Hebrew alefbet, ת.

These are usually counted from 11 to 32, Kircher however writes them from 1 to 22.

ט Misericordiae et Iustitiae, [the channel between] Mercy and Justice.

There are said to be three stages preceding the process of emanation in qabalah that parallel Genesis (בראשית) i:i-v.

אין meaning Not, this foreshadows the first three supernal Numbers.

אין סוף meaning Limitless Not, this is the highest aspect of the Tree we can conceptualise as אין preceding it is nothingness. אין סוף foreshadows the first six Numbers.

אין סוף אור meaning Limitless Light of Not, this in its concentration is called Crown. It contains within it the nine following Numbers.

The Horizon of Eternity is simply the horizon between Crown and Limitless Not.

This is the Count of Omer as written of in Leviticus (ויקרא) xxiii:xvi. These 50 Gates are the 7 Lesser Numbers within each of the 7 lower Numbers (see sub-heading 2.1), 7 x 7 = 49, with Intelligence itself as the 50th Gate by which Moses received the Torah from God.

See this link for more information.

This is the Name of 216 Letters Divided found in Exodus (שמות) xiv:xix-xxi. Each of the three verses is composed of 72 letters; when each verse is written by βουστροφηδόν order, they reveal by appending the suffixes יה or אל an order of 72 angels. 216 letters in total made up of three verses of 72 letters (216 x 3 = 666, the Master Number of Glory).

Outside of strictly Jewish Qabalah these 72 names or angels are attributed to each 5 degree semi-decanate of the zodiac (5 x 72 = 360), to the cards of the tarot, and so on. When these names are written in reverse, some believe they parallel the 72 demons that King Solomon is said to have bound in the Western tradition of magic, and this is relevant here since one of the glyphs from a book attributed to Solomon appears in the Dummy Plug Plant.

Furnishings of the Temple & The Three Worlds

The two Altars, the Menorah, the Table of Shewbeard, and the Tablets of Moses on Kircher's diagram are all furnishings of the Tabernacle (משכן, literally "Place of Dwelling" see Exodus (שמות) xxv), which later became the furnishings of Solomon's Temple. The Place of Dwelling was split into three parts, the Outer Court, the Holy Place and the Holy of Holies.

Each of these three parts are ascribed by Kircher on to each of the triads on the Tree of Emanations.

The number 248 is ascribed to the microcosm as it is the number of major bones in the human body. While the number 365 is ascribed to the macrocosm as it is the length of one solar year. Here, Kircher has associated the 248 positive laws with the Number named Magnificence and the side of Mercy, while the 365 negative laws has been associated with the Number named Fear and the side of Severity.