Instrumentality continues. The focus is primarily on Shinji now, as he learns to accept the individual’s ability to shape their world, and how the self cannot exist without others to define it.

Instrumentality is still ongoing and Shinji Ikari is only one of the billions of people undergoing the process. The event is viewed from his perspective.

Shinji is confronted with the fear of ceasing to exist. But Shinji feels that this fear is not present in him, as he thinks that he might not need to exist, because he feels unwanted and useless. Misato Katsuragi tells Shinji that what he truly fears is failure. Failure to be loved, and of seeing how weak he is. He replies that Misato does the same thing, and she agrees. In fact, she and other characters say, it's true for all humanity, this weakness. It is why Instrumentality is taking place. Humans cannot live alone, but yet they are separate entities: thus conflict and pain are created. Humans cannot live but in Instrumentality. "Really?" asks the text.

The questions, posed by Rei Ayanami: What are you alive for? Who are you living for? Are you happy being alive? Asuka Langley Soryu thinks it is for herself, and says that she is happy. Misato only wants to do what she enjoys. But Shinji is unsure of all these things. Ryoji Kaji's voice asks: "Do you hate feeling lonely? Do you hate suffering?" Shinji does. So does Misato. "So is that why you run away?" Kaji asks Misato. Misato answers in affirmative, asking what is wrong with running away from pain?

But, Shinji says, "I mustn't run away!" He is asked why, and Shinji replies that it is because running away hurts just as much as what he ran away from. It's wrong, even when the others say that he can run away if he wants to. And if he runs, the others will forsake him. Yet also, if he does what others tell him to do, then they won't forsake him. He's afraid of being hurt, but the other characters tell him that he’s not the only one who feels pain. Shinji has just made himself believe that he’s the only one who gets hurt.

If Shinji believes that he has no worth, and does nothing, then he won't be hurt. Shinji has made himself believe all these bad things about himself, so that he has to do things like pilot the Eva because he has nothing else of value to give. And he hates himself. Shinji holds the telephone receiver, and through it, he hears the other characters saying they hate him. Even so, they like him when he pilots. But again, it is Shinji’s self-deception, both the hatred and his sole value being related to the Eva. The others warn him that with this, he will lose his own identity. But Shinji still believes that he has nothing.

Various images of nature are shown, and the characters discuss their feelings related to them. These questions are posed: What do you seek? What do you desire? Are you afraid of being insecure? Misato, Rei, Shinji, and Asuka are all afraid of being unloved. Shinji also wants to be worth something, so no one will abandon him.

But Yui Ikari tells her son that only he can find his worth. Shinji can't understand where he exists, and asks if he is just the sum of items and symbols that others recognize as himself. He knows that what he feels to be himself, is himself, but that's not good enough. Shinji is still confused, he protests that no one understands him. The others tell Shinji, that only he can truly understand himself, so he must be good to himself. But still, he doesn't comprehend the meaning of that.

The others say that if Shinji depends on outward things to define himself, all these things will eventually change and disappear, as time passes. But his heart and mind can truly change his world.

Then the construction of the place changes to a white void, where Shinji exists as a drifting pencil sketch. He interprets this as a world of nothing, but his own voice comes back and says that it's a world of perfect freedom. But perfect freedom is perfect nothingness, for there is nothing to hold on to, nothing to orient himself in. Gendo Ikari steps in and says he will give him a restriction: he draws a horizontal line across the void that defines as ground and sky. With this Shinji loses the ability to fly, and has thereby sacrificed some of his perfect freedom, but in return, he feels more secure as he has something to walk on. In any world, things change, the person changes, and the person can shape the world, through the shaping of perceptions. Yet this must also be in the presence of others. Shinji in this white world feels that he is disappearing, and it is because he can’t know his own shape without other things to compare it to, and there is nothing else there. Shinji knows who he is, but other people must be there shape his mind as well in order to form a complete self. That is the truth.

Shinji experiences an alternate reality which resembles a domestic comedy, everyone recast inappropriate roles: the Children are normal students, Misato is a teacher, Gendo works at the university[2][3], and Yui is a housewife. Shinji himself is drastically changed into a more typical teenage boy, confident and lecherous, while Asuka is his oldest childhood friend, and Rei is a transfer student, presented as a perky, ditzy schoolgirl.

After seeing this, Shinji realizes that there are alternate possibilities to his current life; a Shinji that is not an Eva pilot can exist as well. Reality might not be so bad, if there are all these choices. Shinji still hates himself, though. He is told again that he only believes that he is hated. People can only see things through their own filters. But they can change so much through that, by altering their perspective. 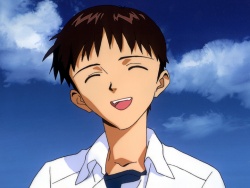 After seeing this, Shinji realizes that there are alternate possibilities to his Shinji decides that he can learn to love himself, and he wants to be "me" and to stay "here". The dark world shatters, and Shinji is left standing atop a coral reef under a sunny sky, surrounded by most of the other characters. He is wished "Congratulations!" by the human cast (and a squawking Pen Pen), and smiles, thanking everyone.

"To my father, thank you[4]. To my mother, farewell[5]. And to all the children... Congratulations!" 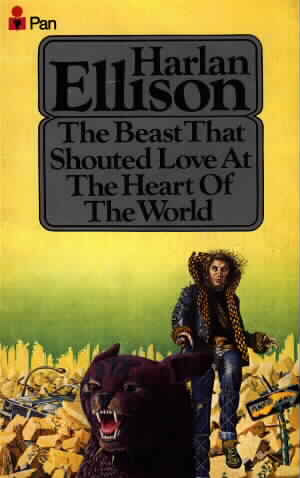