A myriad of real world vehicles can be seen throughout Neon Genesis Evangelion, End of Evangelion, and Rebuild of Evangelion. These are usually military vehicles, sometimes civilian, but always drawn and animated with great detail to their features.

Evangelion has a special relationship with warships, which go on their own page, although boats and small watercraft will remain on this page. See Warships in Evangelion for details on the warships of the series.

The tank most commonly seen in the series, the Type-74[1] is the main battle tank of the JGSDF with 700 deployed as of 2006. It was originally designed during the 1960s, an era of tank design where it was assumed that HEAT (High-Explosive Anti-Tank) rounds had made most armor obsolete, and as such it has relatively thin armor that made the tank almost completely obsolete before the first production models even rolled off the assembly line in 1975. It is primarily armed with a Royal Ordnance L7 105 mm rifled gun, sports 120mm of armor, carries a crew of four, can travel at a speed of 53 km/h, and weighs 38 tonnes. In Explanation of Evangelion 1.01 it's called Type-76 Kai (modifed).

This tank has been misidentified as a multitude of vehicles, among them a Leopard 2 A10 (fictional variant of the German Leopard 2, a British Challenger 2, both based on the turret shape. However, turret armor is often and drastically changed across different versions (one such example being the Leopard 2 A4 compared to the A5), so the deciding factor is the layout of the hull, most notable features being the width to height ratio of the hull, the position of the driver's hatch, headlights and tow hooks.

In real life, the Type 90's design is quite similar to that of the Leopard 2, having very similar armor layout to the A4 and using the same 120mm Rheinmetall L44 smoothbore gun also used by the American M1 Abrams, South Korean K1A1 and older versions of the Leopard 2. What sets it apart from other MBTs is its suspension system - a hydraulic one allowing for the hull to tilt forwards and backwards in order to reduce its profile when cresting hills - and the main gun having a conveyor belt style autoloader, reducing the crew to three men compared to the four most other MBTs have. The exact composition of the armor is a tightly kept secret, but it follows the principle of modular composite armor: Blocks of layered ceramic and steel plates intended to shatter impact rounds and dissipate the effect of hollow charges, that can be individually replaced when damaged, even as a field repair. Due to the overpressure system inside the crew compartment, the tank is NBC (nuclear, biological, chemical) proof, meaning it can withstand and protect the crew from gas attacks and even the aftereffects of a nuclear strike.

The T-80[2] is a Soviet main battle tank developed from the T-64[3], it entered service in 1976 and it was the first production tank in the world using a gas turbine engine for its propulsion, a full four years before the first appearance of the US M1 Abrams. The Russian army discontinued procurement and development of this tank because of its poor performance during the First Chechen War, but it's still under production for export, and diesel power variants with a much lower fuel consumption (one of the type's principal problems, shared with all gas turbine tanks) have been developed. The version shown in Evangelion 2.0 is called T-80UN in the Evangelion 2.0 Complete Records Collection, it's a fictional version.

It can be seen in Evangelion 2.0 during the battle against the Third Angel.

T-80s just before firing their main cannons in Evangelion 2.0 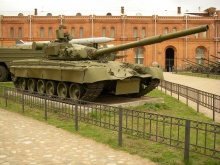 A T-80 in a Saint Petersburg museum

The BM-30 "Smerch"[4] (tornado) is a Russian-built multiple rocket launcher first designed in the 1980s that is currently used by 13 different countries, and whose Russian designation is 9A52. It is capable of firing 12 300mm missiles and rockets in 38 seconds over a maximum distance of 90km, with a total reload time of twenty minutes. It requires a crew of three, weighs 43.7 tons, and has a maximum speed of 60 km/h.

It can be briefly seen in Evangelion 1.0 during the initial attack on Sachiel.

Several of these can be seen in EoE being used by the JSSDF to assault Nerv's defenses.

A Russian Navy fighter first introduced in 1994, the Su-33[8] can be seen prominently in Episode 08. This is rather different from the Su-33's real-life production run being limited to 36 aircraft (excluding prototypes). The animators have very faithfully depicted the nose landing gear of the Su-33 as seen on the right of the image from Episode 08, but this fidelity to detail ironically makes it clear that the STOBAR aircraft can't operate from an American Nimitz-class carrier in that configuration; they lack an American-pattern "tow bar" catapult attachment to their nose landing gear.

A twin-seat fighter bomber of the Russian Air Force. It first flew in 1990 and entered production in 2004 incorporating design aspects from other Sukhoi fighters including the Su-33.[9] It appears in Evangelion 2.0 in the role of escorting Unit-02 to Japan. And despite the fact that it is not designed for carrier flight operations it appears at the end of Evangelin 2.0 in the 3.0 next time preview on a Nimitz-class aircraft carrier. (It is worth noting that the animators misjudged the size of the aircraft - the aircraft seen on the carrier are approximately 70 percent the size of their real-world counterparts).

An American multi-purpose tilt rotor aircraft that combines the speed of an aircraft with the landing versatility of an helicopter. First conceived in 1983, built by the Bell and Boeing corporations the prototype flew in 1989.[10] The Osprey began to phase out the older Sea Knight helicopters in the U.S. Marine inventory in 2007 after some setbacks during testing. The V-22 Makes some discreet appearances in Evangelion 1.0. The Osprey also appears in Evangelion 2.0 by delivering personnel to the Eva-03's activation test, as well as appearances in the Evangelion 3.0 teaser at the end of 2.0.

The soviet built Yak-38 appears in Episode 8. The Yak-38 is a VTOL fighter plane developed in 1971 with a total of 231 built.[11] The variant of the aircraft used appears to be the Yak-38U which is the only version of the aircraft which has a crew of two.[12] However, Kensuke refers to the variant in-Episode as a "Yak-38 kai -- denoting "modified" or "special", with the English dub translating this as "custom" -- suggesting that the Yak-38 Kaji flies in is a heavily modified or custom-made variant of the Yak-38U.

The Beriev A-40 Albatross, NATO reporting name "Mermaid", is a jet powered flying boat built for the Soviet Navy for anti-submarine warfare. It first flew in 1986, and shortly after the first flight the project was canceled with one plane built and another almost completed. [14] The Nerv operated A-40 appears in Evangelion 2.0 transporting Kaji from Bethany Base.

The Lun class ekranoplan , NATO reporting name "Duck", is a jet powered seaplane built for the Soviet Navy. It is equipped with six guided missiles mounted in tubes on top of the fuselage and entered service in 1987 with a total of one built. The sole unit was removed from service sometime in the 1990s and has been laid up in a harbor since. [15] The Lun appears in Evangelion 1.0 transporting Misato, Ritsuko, and Maya from the site of Sachiel's suicide following the recovery of Unit-01. The version used by Nerv appears to be solely a transport vehicle since it has the six missiles removed from the fuselage.

The P-3 Orion built by Lockheed Martin is a turboprop maritime aircraft that is used for maritime patrols, intelligence gathering, anti-submarine, and anti-ship warfare. [16] The Orion appears in Evangelion 1.0 providing surveillance on Ramiel.