Metaphysical biology (形而上生物学, keijijou seibutsugaku) is the branch of science that Kozo Fuyutsuki taught at Kyoko University. The term is only featured once, on the placard of Fuyutsuki's research room, although it seems to play a major, however unstated, role in the Evangelion universe. 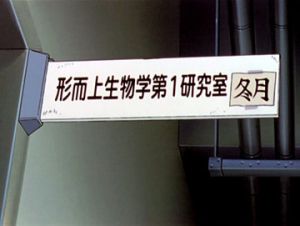 What does it mean?

This section, by necessity, deviates from typical encyclopedic guidelines somewhat. If you can find a way to make it work better, by all means...

On the matter, Newtype Filmbook 8 only says, "In 'metaphysics' (a philosophical term), a stance is taken that, transcending the tangible and individual things that are presented in one's experiences, is all-encompassing, final, and absolute." A discussion at the Forums was somewhat more enlightening. Carl Horn reported, "There is also such a term in real life as 'metaphysical biology,' but it is most often used in the history of philosophy; specifically, that Aristotle believed in 'innate natures' within types of people that determine what kind of people they are (similar concepts have existed in other cultures, of course). Some people have argued for the reconsideration of these ideas in the light of genetic research, although Aristotle's own thinking was often unscientific (just like EVA)."

On the surface, this doesn't seem to have very much to do with NGE. One way to approach the problem is to consider the term on an etymological level: "Metaphysical" is literally "beyond the physical," so "metaphysical biology" would be, in essence, the biology of what is beyond the physical. What immediately comes to mind? Souls: The universal human concept that thus far cannot be justified on scientific grounds in the real world. They are treated in NGE as a form of life in and of themselves -- and very much within science's dominion, with all of the "pseudoscientific" (from our POV) gobbledygook one might expect. A logical conclusion: Metaphysical biology exists as the established "science of the soul" in NGE's "alternate history," and encompasses the technobabble (an unapologetic chimera of concepts from psychology, quantum psychics, and religion) associated with their workings.

This interpretation is not one that is endorsed by any known canon. However, "metaphysical biology" has been embraced by the fandom to fill a conceptual gap that was previously missing. The term will be used here with the tacit understanding that it is "the biology of the soul," unless stated otherwise.

Overview of Metaphysical Biology in Evangelion

In Evangelion, lives are created when a soul combines with an appropriate vessel. Souls originate from the Chamber of Guf. Lilim are made of souls which have combined with LCL. The soul shapes the LCL into an appropriate vessel. Anti A.T. Fields are able to destroy existing A.T. Fields, and when a person's A.T. Field collapses, the soul is freed and the vessel returns to its original state of LCL. Adam, Lilith, and the Angels are made of a substance known as as Particle wave matter or PWM which can hold its shape even without a soul. However, souls are able to shape PWM as seen in The End of Evangelion when Rei returns to Lilith who then takes on Rei's form.

Seele, Gehirn, and later Nerv have the technology that allows them to manipulate Metaphysical Biology and souls. Two forms of this soul manipulation are Salvaging and Contact Experiments.