From EvaWiki
(Redirected from Explanation of Evangelion 1.01 (Translation))
Jump to: navigation, search 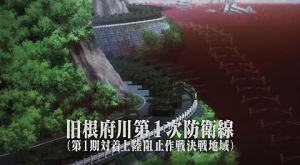 Explanation of Evangelion 1.01 is a feature included on the second disc of the "special edition" 1.01 DVD release of Evangelion 1.0: You Are (Not) Alone. This is identical to the regular movie, save for the inclusion of large captions displayed throughout the film which provide the "official designations" of people, locations, weapons, technology, and so forth. This was probably done in homage to Episode 06 of the original series, from which the final act of the film is adapted.