From EvaWiki
Jump to: navigation, search
For the Evangelions of the Neon Genesis Evangelion continuity, please see: Evangelions. 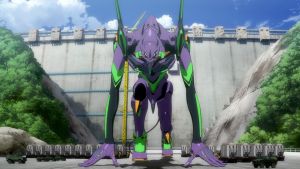 Eva-01 at the start of an anti-Angel operation

An Evangelion (エヴァンゲリオン), or Eva for short, is a giant, cybernetically modified humanoid entity created by the organization Nerv. While the Evas' ostensible function is to serve as general-purpose weapons against the threat of the Angels and prevent the catastrophic event known as Third Impact, a more sinister truth to their existence hides beneath the surface.

Essentially nothing is currently know about how ordinary Evangelions are created. Their nickname "Eva" (German for "Eve") suggests that they originate in some manner from the Adams, or perhaps from a predecessor entity called "Adam", if such exists in this continuity.

Three of the Evas -- Eva-01, Mark.06, and Eva-13 -- are either directly confirmed or strongly implied to be converted Adams. See also: Identities of the Adams