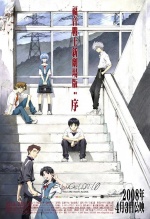 Evangelion: 1.0 You Are (Not) Alone (ヱヴァンゲリヲン新劇場版: 序) is the first of four films released in the Rebuild of Evangelion series, based on the original anime series Neon Genesis Evangelion, which premiered in Japan on September 1 2007. It was produced and co-distributed by Anno's Studio Khara in partnership with Gainax. Yoshiyuki Sadamoto provided character designs for the film, while Ikuto Yamashita provided mechanical designs. Both Shinji Higuchi and Tomoki Kyoda provided the film's storyboards.

The film focuses on a young teenager named Shinji Ikari, who is asked to pilot a giant mecha known as "Evangelion Unit-01" to protect the world from mysterious creatures known as Angels. The plot is largely a point-for-point adaptation of episode 01 up to episode 06 of the original anime. While most scenes and events are replications of the original series, some unfold differently with new or omitted scenes.

The film begins in 2015, fifteen years after Second Impact, when fourteen-year-old Shinji Ikari receives a phone call, summoning him to Tokyo-3, by his estranged father, Gendo Ikari. While caught in a crossfire between UN forces and a strange creature, known as the Fourth Angel Sachiel, Shinji is picked up by Lt. Colonel Misato Katsuragi, and taken to the headquarters of his father's organization, Nerv. At Nerv HQ, Shinji is shown what his father has been working on: A giant "robot," known as Evangelion Unit-01. Shinji's father, forces him to pilot it, saying he is the only one who able to do so. Shinji initially refuses, but then reluctantly agrees when Gendo threatens to send Rei Ayanami, a heavily bandaged Evangelion pilot, into battle. He initially fails to defeat the Angel, and blacks out in pain, but the Evangelion goes berserk and defeats the Angel on its without the pilot.

Soon afterwards, Shinji wakes up in the hospital and is officially instated as the pilot of Eva-01, the Third Child. Shinji is taken in by Misato as her new housemate and enrolled in the local middle school. Here he runs into problems with classmates Toji Suzuhara, whose sister was injured in the battle and beats Shinji up in retaliation, and his friend Kensuke Aida. The Fifth Angel, Shamshel, attacks Tokyo-3, and Shinji is forced to battle again.

Toji and Kensuke sneak out of the emergency shelters to see the action, while Shinji enters the battle. The Angel slams Unit-01 into a mountainside, nearly crushing Toji and Kensuke. Misato has the two take cover in Unit-01's cockpit before ordering Shinji to retreat, but he disobeys and destroys the Fifth Angel with the equipped knife. Misato later reprimands Shinji for disobeying her.

After the ordeal with the Fith Angel, Shinji decides to run away. After making his way to an under-construction bridge he is brought back by Nerv employees. At school, Toji decides that Shinji isn't a bad person, and they become friends after he insists that Shinji punch him in return. Following this, Shinji interacts with his fellow pilot, the mysterious Rei Ayanami for the first time.

The Sixth Angel, Ramiel, appears and tries to drill into the Geofront. Shinji is ordered to deploy Unit-01 against it, but the Angel fires a particle beam at the Eva, critically injuring Shinji.

Another incredibly powerful Angel appears, Ramiel, and tries to drill into the Geofront. Shinji is ordered to deploy in Eva-01, but the angel fires a particle beam at the Eva which nearly kills Shinji with. It continues to drill down into the Geo-Front cavern below. Shinji wakes up from a coma sometime later and is expresses fear of piloting again. Seeing that, Rei tells him she will take his place and leaves for the mission alone.

When he recovers, Misato takes the despondent Shinji down to Central Dogma, where she shows him the Second Angel Lilith: a white giant suspended on a cross. She explains that if an Angel were to unite with Lilith, then it would cause Third Impact. An event that would mean the end of all life, and that this is the Angel's goal. This encourages Shinji to pilot Eva-01 again. A plan is developed to defeat Ramiel by using all of the electrical power of Japan to power an experimental positron rifle which Eva-01 will use to snipe Ramiel while Rei, in Eva-00, supports by blocking its attack. After his first shot fails to kill the Angel, Shinji is successfully able to fire a second shot and destroy the Angel. Rei is nearly killed defending Shinji from the Angel's return fire, but he is able to save her by dunking the damaged Unit-00 into water to cool it off and prying her cockpit out using Unit-01's knife. Shinji cries out of fear of nearly losing her, and Rei, normally cold and emotionless, eventually shares a smile with him.

Meanwhile, in the final scene, the camera pans up from the end of the battle with Ramiel and zooms in on Earth's Moon. On the Moon, a line of what appears to be nine coffin-like boxes is on the lunar surface, with a giant stain of blood intersecting the landscape. Out of one of these rises a naked Kaworu Nagisa, who begins having a cryptic conversation with Chairman Keele's Seele 01 "sound only" monolith communicator. Behind them on the Moon appears to be a secret Seele base, with an unidentified giant, wearing a purple seven-eyed mask and wrapped in white bandages--an overall appearance very similar to the Second Angel Lilith--restrained behind them in a pit covered with scaffolding. Kaworu says that the "Third" hasn't changed, referring to Shinji, and that he looks forward to meeting him.

Explanation of Evangelion 1.01 is a feature included on the second disc of the "special edition" 1.01 DVD release of Evangelion 1.0: You Are (Not) Alone. This is identical to the regular movie, save for the inclusion of large captions displayed throughout the film which provide the "official designations" of people, locations, weapons, technology, and so forth (a la Episode 06 of the original series).

A preview following the credits, structured the same as the "Next Episode Previews" in Neon Genesis Evangelion, complete with the same musical theme, voice-over by Misato, and promises of more fan service.

It opens with an introduction to the Evas scheduled to appear: The "provisional" Eva-05 on an underground rail, Eva-02 being air-dropped (outfitted with the new "S-type Equipment"), Eva-04's explosion, Eva-03 (infected by Bardiel), and Eva-06 descending from the Moon. The text "ADAMS" and a cryptic image of several ghostly, vaguely humanoid figures are flashed on the screen. The text "LILIN+?" then appears, followed by several shots of the "human" cast: Kaji and Gendo (as seen at the end of Episode 08); Misato slapping Ritsuko (recycled from Episode 16); Asuka, Rei, and Shinji (from the Zeruel battle in 19); and Kaworu (smiling against a dusky sky). Finally, the new character Mari is seen from behind, looking up at multiple giant glowing pink crucifixes, followed by a close-up of her face.

Released in on July 13, 2007, set to "FLY ME TO THE MOON (IN OTHER WORDS) 2007 MIX" by Hikaru Utada. Beyond the newer, more impressive visuals, the trailer does little in terms of showing any new content that wasn't present in the original series. Though it does show Shamshel's heavily revised design, and include a previously unseen scene of someone tightly holding hands; later revealed to be Misato and Shinji. The text at the end of the trailer reveals the release date for September 2007.

The second trailer was set to "Beautiful World" by Hikaru Utada. Like the first trailer, and keeping with the tone of the first film, the trailer does little in terms of introducing any content previously unseen, barring reframed shots and more impressive visuals. It does include a glimpse of Misato and Shinji descending in an elevator, which turns out to be to Central Dogma, and the first glimpse of Kaworu as he awakens (on the moon).

Bizarrely, Kaworu speaks to Seele-01 on the moon, although there is no air on the moon and so no sound can propagate. Even if Kaworu didn't need to breathe and could survive in a vacuumed, extreme-temperature environment, to speak normally as on Earth (or in any atmosphere) would be impossible.

It can be assumed that the fact that Kaworu can speak, breathe and live in a vacuum is due to the fact that he is an Angel, as we learn in Evangelion 3.0: You Can (Not) Redo, and does not have the same requirements or restrictions that a normal human would have on the Moon also tying into Kaworu's original role in the TV series as an Angel somehow related to SELEE.