From EvaWiki
(Redirected from Doors of Guf)
Jump to: navigation, search 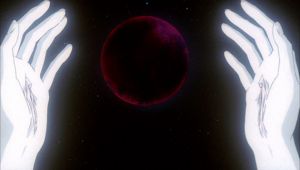 Guf (ガフ, "body"), in Neon Genesis Evangelion, refers collectively to the Chamber of Guf (ガフの部屋, GAFU no heya) and Doors of Guf (ガフの扉, GAFU no tobira). The former term is borrowed from Judaic lore, and said to be the place where all unborn souls reside. While little is said about the Eva version of the Chamber of Guf, it appears to play a similar role, strongly implicated in the spiritual origin of Lilith- and Adam-derived life.

There are only three direct allusions to the Guf within the show itself.

In Episode 21' (during the Katsuragi Expedition footage):

In Episode 23 (to Misato and Shinji in the Dummy Plug Plant):

Ritsuko: "Yes, they're human. The Evas do not intrinsically have souls, but they have human souls embedded in them. They were all salvaged. The only vessel that contained a soul was Rei. She was the only one born with a soul. The Chamber of Guf was empty, you see. These things here that look like Rei have no souls. They're just vessels. That's why I'm going to destroy them. Because I hate them."[2]

In Episode 26' (during Third Impact):

Fuyutsuki: "The Chamber of Guf has been unsealed. Have the doors to the world's beginning and end finally opened?"[3]

In addition, the vulva-like apertures that open on Lilith's palms in 26' to receive souls are referred to as "Doors of Guf" in the relevant storyboard.[4]

Nature of the Guf

The basic premise of the traditional Chamber of Guf, that of "storehouse" for unborn souls, can be inferred to apply to the Eva version. In EoE, the Chamber is referred to as "the world's beginning and end"[3], to which the souls of Lilin (and possibly other Lilith-born) flock during Third Impact, an event that is essentially creation in reverse (bodies reverting to primordial ooze, "return to nothing", etc.).

The exact nature of the Chamber of Guf is elusive, but the available visual evidence suggests it may be a space residing in higher dimensions[5], similar to the Dirac Sea, and linked to both the body of a Seed of Life and its associated Moon.[6] The Doors of Guf can manifest as apertures on a Seed's palms to provide a path between the Chamber and the "outside world". (The "stigmata" rendered unto Eva-01 by the Eva Series may represent the forcible creation of Doors by Seele in preparation for Eva-01's at-the-time planned role in Third Impact.)

Each Seed may possess its own Chamber of Guf. Adam is implied to have opened its Doors of Guf at Second Impact, which probably entailed bestowing souls upon the Angels. In contrast, the Fuyutsuki quotation[3], along with the "Reverse-Creation" aspect of Third Impact, suggests that the Chamber of Guf had been originally opened and subsequently sealed at the "world's beginning" (i.e., Lilith's act of creation), and is only now, at the "[world's] end" being opened again. In confluence with Ritsuko's line, "The Chamber of Guf was empty", this also implies that Lilith completely emptied the Guf before sealing it. If this is the case, Adam must have a separate one.

Rather unlike Judaic lore, in which the emptying of the Chamber of Guf signifies the Messiah's coming, the consequences in Eva -- based on the context of Ritsuko's words[2] -- appear to merely be that: (A) there were no unborn souls in the Chamber to bequeath upon the Evas, and they had to be given salvaged human souls instead; and (B) only Rei (i.e., the first Rei?) was born with a soul, whereas her clones are soulless shells. The latter raises the question of why Rei was born with a soul if the Chamber was empty. which may have implications for her possession of Lilith's soul.

Guf in the Jewish tradition

While Guf (גוף) is the Hebrew word for "body," the Chamber of Guf is not merely a "chamber of bodies," however. The Body's chamber is the place in the celestial Body from which all unborn souls originate. This chamber is said to have existed prior to Creation.

The peculiar idiom of describing the treasury of souls as a "body" may be connected to the Kabbalistic tradition of the primordial man named Adam Kadmon. Adam Kadmon, God's "original intention" for humanity, was a supernal being, androgynous and macro-cosmic (co-equal in size with the universe). When he sinned however, humanity was demoted to flesh and blood, bifurcated and turned to mortals. According to the Kabbalah, every human soul is just a fragment (or fragments) cycling out of the great "world-soul" of Adam Kadmon. Hence, every human soul comes from Adam Kadmon's "Guf (Body)."

We read from the subject of propagation in the Talmud [7] the following:

"R. Assi stated: The Son of David (i.e. the Jewish Messiah) will not come before all the souls in Guf are disposed of; since it is said: For the spirit that enwrappeth itself is from Me, and the souls which I have made [8]."

In an early Kabbalistic work called the Sefer ha-Bahir (סֵפֶר הַבָּהִיר), it is also said that:

"In its hand is the Treasury of Souls. When Israel is good, these souls are worthy of emerging and coming into this world. But if they are not good, then [these souls] do not emerge. We therefore say, "The Son of David will not come until all the souls in the Guf (Body) are completed." What is the meaning of "all the souls in the Guf"? We say this refers to all the souls in Adam (Kadmon)'s body. [When these are completed] new ones will be worthy of emerging. The Son of David (the Messiah) will then come. He will be able to be born, since his soul will emerge among the other new souls."[9]

In the Gemara (Rabbinical commentaries and analysis) of the twelfth tractate of the second order of the Mishna (משנה), called Hagigah, we may have an allusion to another, separate celestial Body in the Seventh Heaven of Saturn (called Araboth), for we read:

This is a very different concept to the Body we find written of in the Talmud: the Body as written of in the Talmud has always existed, but the Body described in the Midrash exists after the act of Creation. The Body described in the Midrash is said to be the source of Cores (קרח), said to be inferior souls that were not created at the beginning of Creation.

The word guf appears in the O.T./Torah only once, in Nehemiah vii:iii: "let the Doors be shut [to Jerusalem] and bar them."

Guf, Guff, Guph, Gof, Goff and Goph are all acceptable English transliterations of the Hebrew גוף.

The Door of Guf (Rebuild)

In Evangelion 2.0 and 3.0, the Door of Guf (ガフの扉, Gafu no Tobira) appears in the form of a black void surrounded by multicolored rings.

The events at the end of Evangelion 2.0 resulted in Near Third Impact, wherein Shinji's attempt to save Rei from the 10th Angel caused Eva-01 to open the Door of Guf. The Door formed from Eva-01's halo and was surrounded by slowly rotating red and white rings. The portal was dissipated when Eva-01 was struck with the Spear of Cassius, but it is unknown if the Door was fully closed after this event.

In Evangelion 3.0, an awakened Eva-13 opens the Door of Guf during Fourth Impact. This Door is larger than the previous version and surrounded by multicoloured rotating rings. It is closed after Kaworu impales Eva-13 with two Spears of Longinus, both pilots are removed, and the unit finally disabled.

During Fourth Impact, an object is visible on the other side of the portal. It appears to be spherical, with large cross-like beams protruding out in the six cardinal directions. What this "Guf Unidenified Flying Object" could be is currently completely unknown. It has been speculated that this object represents the Chamber of Guf.[Source needed]