From EvaWiki
Jump to: navigation, search
Translate this page
Other languages:
English 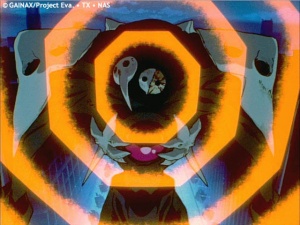 Sachiel's A.T. Field can be seen when Evangelion Unit-01 comes in contact with it.

An A.T. Field (short for "Absolute Terror Field"[1]) is a nearly impenetrable force-field barrier which Angels and Evangelions can generate. Conventional weapons are effectively useless in penetrating an A.T. Field; the only thing that do so is another A.T. Field, such as those created by the Evangelions. Additionally, it can be breached by using a directed-energy weapon such as the Positron Cannon from Episode 6.

Properties of an A.T. Field

Although A.T. Fields were at first seen to be a purely defensive ability, it is demonstrated throughout the series that A.T. Fields can be used in an offensive fashion. The first instance of this was when the Angel Sahaquiel used its A.T. Field in Episode 12 to crush several nearby satellites attempting to observe it in Earth orbit[3]. Leliel's bizarre multi-dimensional pocket-dimension is apparently created by inverting its A.T. Field in some way. Arael's mind-probe attack is based on a special projection of its A.T. Field. Eva-01 itself wielded its A.T. Field as a weapon in Episode 19 at the climax of the battle against the Angel Zeruel, projecting it to slice through the Angel's body and cripple it. By Eva 02's final battle in The End of Evangelion, Asuka's piloting abilities had increased to the point that she offensively wielded Eva-02's A.T. Field against advancing JSSDF hoverjet squadrons and tank battalions.

Later in the series, Kaworu Nagisa reveals that every living thing possesses an A.T. Field: Angels and Evangelions just have A.T. Fields so strong that they are physically manifest. A.T. Fields which regular humans generate hold individual beings' egos together, separating individuals. Each Evangelion has a human soul inside it: A.T. Fields are generated by the human soul contained within the Eva. The A.T. Field of an Angel is also generated specifically by the Angel's soul.

In the climax of The End of Evangelion, the Rei/Adam/Lilith hyper-being generates, along with the Mass Production Evangelions and Evangelion Unit-01, a massive "Anti A.T. Field" which neutralizes all A.T. Fields across the world, causing all of humanity to revert into the primordial soup of LCL, merging into a single super-organism in the climax of the Human Instrumentality Project.

The easiest way to destroy an A.T. Field is to essentially counter it with another A.T. Field, as demonstrated by the Evas on several occasions. An example of this is seen in Episode 1, when the berserk Unit-01 corrodes[4] Sachiel's A.T. Field in battle.

Besides Evangelions, only two human-made weapons are capable of effect against Angels. The first is the N² Mine, the most powerful non-nuclear weapons ever created. N² mines have succeeded at stunning or even seriously injuring some of the weaker Angels (albeit temporarily because wounded Angels have always regenerated), but against some of the more powerful Angels, even multiple N² mines have failed to do any damage whatsoever.

There was one other instance where an A.T. Field was breached without the use of the Evas, the fight against Ramiel, where a prototype positron rifle using the electricity of the entire power grid of Japan penetrated Ramiel's A.T. Field and killed the Angel. However, such a weapon is subject to power and range limitations, as witnessed in the battle against Arael where a positron rifle (of a different model from that used against Ramiel) failed to harm the orbiting Angel.

Since the very earliest days of Evangelion analysis, there has been a rumor that A.T. Field is a genuine psychological term that describes the barrier that separates autism patients from the world around them. However, extensive searching of online psychology researches and forums has failed to find any use of the term other than in reference to NGE. Therefore, this rumor can safely be dismissed as false. 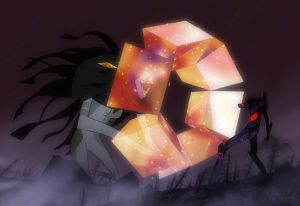 The "Geometric Shapes" weapon before attacking.

In the Rebuilds, the A.T. Fields present all of the same properties so far, and are once again used as weapons by the Evas.

In Evangelion 2.0 during the battle with Zeruel, the berserk Unit-01 turns its A.T. Field into a beam shot from its eyes.

In the same battle with Zeruel, Unit-01 creates an artificial arm with its A.T. Field, and uses it as a weapon, taking the form of a ring of geometric shapes which blast the angel back.